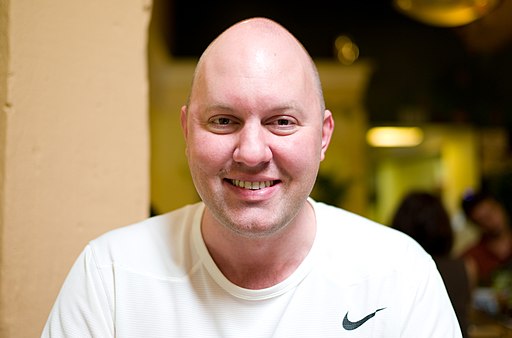 My life is a lot better because of your emails and podcasts.

I have found so many good podcasts (especially one off podcasts that I would not subscribe to and would have never found) and books from your recommendations.

I really love the way you connect your ideas and show your work (Austin Kleon).

Thank you for all the hard work.

Which podcasts are you referring to?

[…] picked up the book, Walt Disney by Neil Gabler, after Marc Andreessen recommended it. The book is good, but it’s […]

[…] it’s not just money. Marc Andreessen pointed out that the biggest cost isn’t money, it’s time and the missed opportunity to […]

[…] boy. Ben Horowitz and Marc Andreessen joined Sonal Chokshi on their home turf, the a16z podcast to talk about the future of the world. It […]

[…] instilled it at his venture capital firm a16z. He did such a good job this is how his cofounder,  Marc Andreessen put […]

[…] succeed because they bust cognitive biases, they find new facts, they understand history. When Marc Andreessen says he trashes the shit out of Ben Horowitz‘s arguments he does so to test them. […]

[…] default “no” is valuable because it limits what you get into. This removes what Marc Andreessen said is a the biggest cost – […]

[…] wrong (but you better have your facts right). It was Isdell’s idea to dress in Pepsi clothes. Marc Andreessen and Ben Horowitz push back at each […]

[…] Marc Andreessen said that the biggest cost of an investment isn’t money or time, but opportunity. He told Tim Ferriss, “The investors in Friendster were more likely than not, unable and unwilling to invest in Facebook when it came along because they were conflicted.” […]

[…] Marc Andreessen said that opportunity cost is something he thinks about in his investments. It wasn’t that smart investors missed Facebook, he told Tim Ferriss, but that some couldn’t invest because their financial and professional commitments were elsewhere. […]

[…] argue well you need the right culture. It’s why Marc Andreessen takes the opposite side of Ben Horowitz in arguments. That creates an environment (read: culture) […]

[…] can implement this if they argue well. Marc Andreessen says that he “trashes the shit” out of ideas that his partner Ben Horowitz brings in. […]

[…] drivers to test the app. Gentlemen and women in Silicon Valley call this a ‘pivot.’  Marc Andreessen (naturally) put it more colorfully; “When I was a founder, we didn’t have the word pivot. We […]

[…] and [Marc Andreessen](https://thewaiterspad.com/2016/06/10/marc-andreessen/) both have people take the other sides of their arguments. Jeff Bezos has a “combative” […]

[…] successful entrepreneurs, such as Marc Andreessen, use concepts like having a “red team”, that is created for the sole purpose of shutting down one’s latest idea. Even if they think the […]

[…] combine the advice of Peter Thiel and Marc Andreessen; the future is somewhere already, be curious and start […]

[…] good it is. Healthy arguments should be inherent in the culture. We’ve seen this advocated by Marc Andreessen, Charles Koch, and Bill […]

[…] without ego. It can be uncomfortable noted Dan Egan but it’s a good way to make decisions. Marc Andreessen and his partner Ben Horowitz seem to have followed Ike’s lead. Marc said he takes the other […]

[…] investing in obvious things. Meb Faber said that “me too” funds will often fail. Marc Andreessen said to look beyond the […]

[…] Jason’s advice was earned the hard way. When he was pitched on Airbnb he passed, imagining that only broke college students and serial killers would use the service. Errors of omission – like this – are the worst warned Bill Gurley and Marc Andreessen. […]

[…] arguments are hard but worthwhile. Marc Andreessen has […]

[…] about their relationship and asks how Horowitz and Andreessen argue so well. It was Marc’s interview with Tim Ferriss that first suggested we argue well. Horowitz explained it like […]

[…] it’s not just money. Marc Andreessen pointed out that the biggest cost isn’t money, it’s time and the missed opportunity to do […]

[…] Do you intuit the devil’s advocate position / have you stress tested your ideas? (see the concept of “red teaming“) […]