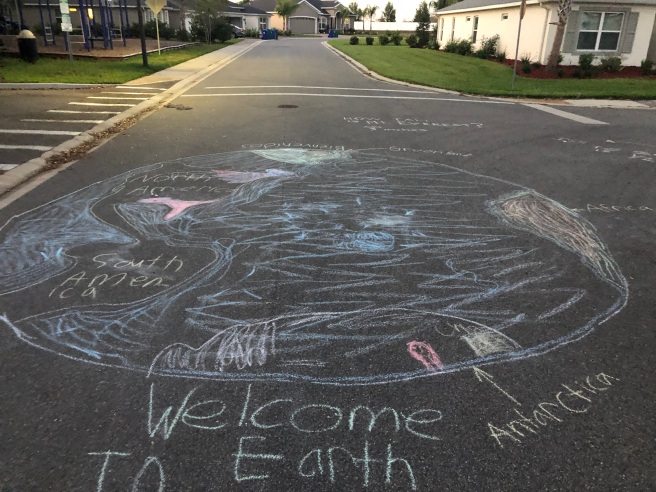 This is the earth.

Part of our quarantine education was to get outside and make some scale drawings of our solar system.

We made our earth one roadway wide, about twenty feet in diameter and paced off two hundred yards and drew the moon. It was five feet wide. The ISS was seven inches from the earth’s surface.

It’s always challenging to consider the scale of the universe. It’s huge. It’s so huge that Mars was sixty miles away in our little universe.

Part-of-the-reason Einstein marveled about compound interest is because scale is really hard to understand. Once things scale up or down past the human perspective we just don’t quite get it. This came up on two recent podcasts.

First, Peter Attia spoke with his daughter about the coronavirus. It was an excellent, simple, good-for-kids episode. So how big (or little) is the virus?

A thousand viruses. That’s beyond the human scale of understanding.

One the other end of the spectrum, and closer to the solar system situation was Cade Massey’s longhorn lament.

“One of the things that frustrated me most when I to talk with people was them saying ‘Well, you’re not going to get this if you’re young.’ We knew the probabilities are steeply related to age but there’s still a probability for every age group. Throw millions of people at a small probability and you’ve got some sick people. We just aren’t good psychologically with these kinds of probabilities.” Cade Massey

The percentage for infection, hospitalization, and ventilation are remarkably small.

New York City houses eight million people and the metro area is home to twenty-one million. Projections note that only .27% will need beds, and only .063% will need ventilators.

Right now my sixth grade daughter is learning percentages as parts of the whole. She answers questions like; “If sixty percent of a class of twenty-four are boys, how many children are in the class?”

That’s good sixth grade math but it gets hard with large numbers. One-fourth of a percent is really small but eight million is really large. How does someone make sense of that? We probably just need to think slow, not fast.