This is the ‘typical’ house payment for the last fifty years. ‘Typical’ being the median sale price and average thirty year rate.

If my parents had bought when I was born they paid $982. But if they bought when my brother was born, it would be almost two-hundred dollars less each month. A huge difference for a young family.

The sweet spot for modern buyers was October 2011 when payments flirted with $1,000.

The Covid-19 drop and surge can be seen toward the right. It wasn’t until August of 2021 that payments crossed the trend line into wild heights.

What difference does it make for someone now? Since the end of 2020, the ‘typical’ payment increased seven-hundred dollars a month.

Interest rates are a headline metric, but are not the most important thing for buyers. The fall 2022 ‘typical’ monthly payment is: $2,580. A $50,000 decline on the purchase price is equivalent to 1% lower interest payments. Not only that, home prices have a .9 correlation with monthly payments whereas interest rates have a -.55 score.

Housing is easy news to consume. The bad is about rising prices and rates. The good is about remodels, flips, and luxury. The truth is somewhere in the middle, here it’s in color.

How “off track” are housing prices? The red line is the 2016- March 2020 trend line relative to the graph of median listing prices. Currently prices are a 33% premium to what the historical growth suggests.

Successful copywriting uses the customer’s language. Find out what, how, when, and why the customer thinks – and the words they use.

One accent of customer language is certainty. We dislike not knowing. Not knowing feels risky. It’s why this bag of sugar is so sweet: 30 calories per serving. Diets are trends. Eat this or that? Now or later? Are health bars actually healthy? Is sugar bad for me? It’s too much! But this simple bag of sugar puts it in the customer language: calories, and not that many. 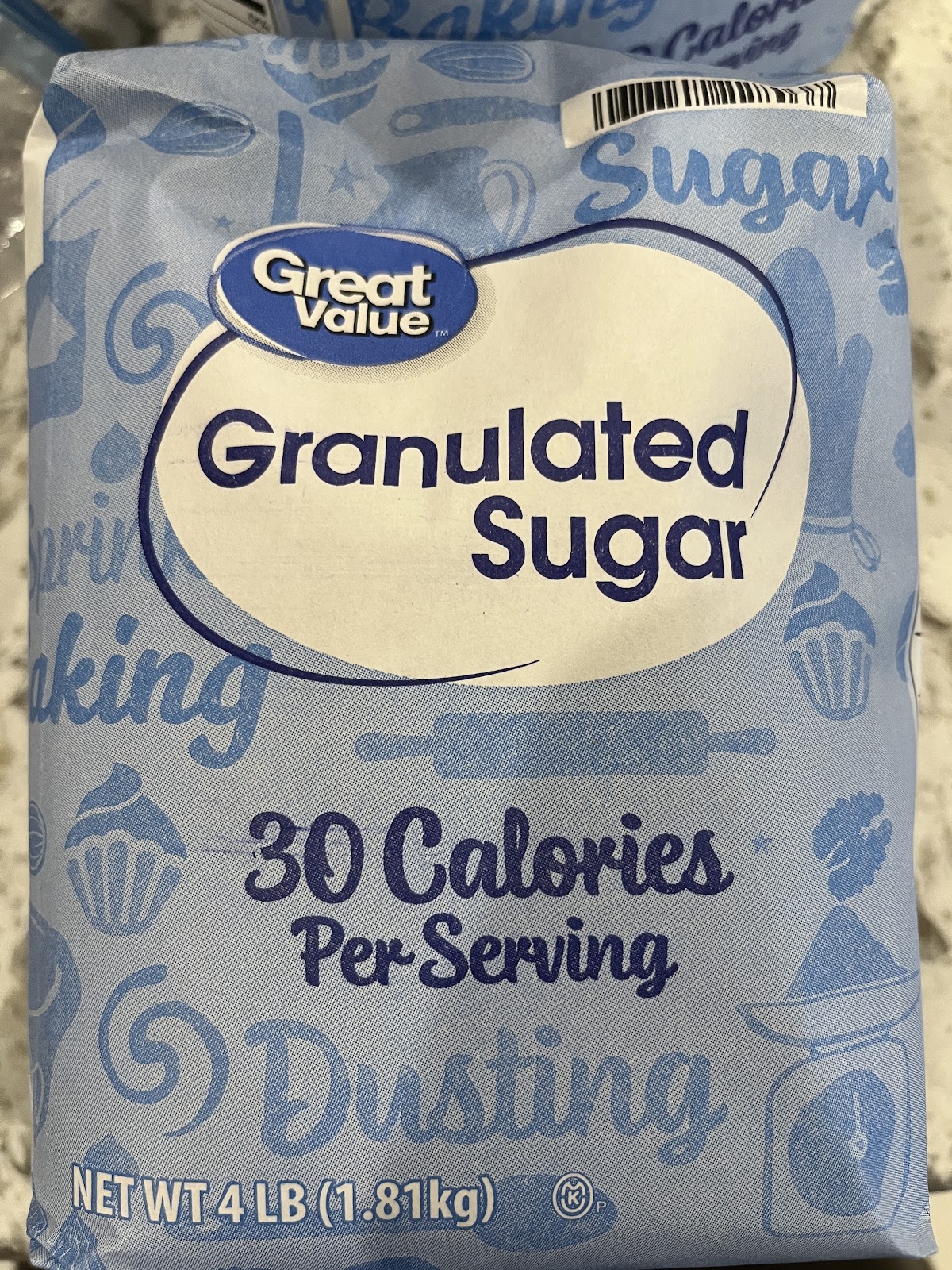 Road construction is another example, only inverted. Fines doubled when workers present. I don’t know how much, but I certainly don’t want it to be doubled! In this case, the natural dislike of the unknown is magnified and aids in the messaging to slow down.

This hook helped Jaws (1975) set the mold for summer blockbusters. It was a difficult movie to make, in part due to “that sonofabitchin’ bastard rig” (the shark) which kept breaking down. The footage was such a mess that during editing Steven Spielberg used barren shots of the water along with John Williams’ score. That was great because rather than seeing the shark, audiences imagined the shark, a worse fate.

Organizations can remove or introduce anxiety in their customer communications. How much depends. On what? On what the customer thinks.

We talked about Jaws’ role in the evolution of the movie business model in this post, Batman BATNA. Contact too:

What do the following movies have in common?

They were released in the same year. It was so good they wrote a book: Best. Movie. Year. Ever.

Was it talent? Maybe. Good economics? Perhaps. Instead, let’s look at this using the Placement, Promotion, and Product Bullseye. If a business ‘hits the bullseye’ it succeeds.

In 2000, Thomas Tull founded Legendary Entertainment. It was one of the first companies to combine private equity investments with Hollywood movie-making.

It was good timing. The late 90s saw the highest number of movie screens in America. In 2004, Blockbuster’s store count peaked. A year later DVD sales did too.

The placement for movies was primo. There had never been more screens on which to place movies. Make enough of something and some of them will be very good.

Tull also nailed the promotion for movies. Prior to Legendary, Hollywood used mass-market advertising – because it worked! Jaws pioneered and Star Wars exploded the model that with national advertising and distribution, movies could be huge.

The final piece of the picture puzzle was a great product. Hire great directors – Nolan, Snyder, del Toro – and get out of their way. Legendary’s product was helped too by characters like Batman, stories like We Are Marshall, and laugh-fests like The Hangover.

The product was also profitable. Movie studios controlled the pricing and theaters earned their keep on soda, sweets, and treats. Ditto for DVD, a product with a high upfront cost but zero marginal cost .

Now flip it. Books are also media. Lee Child is a 3x NYT Best Seller and when Killing Floor was released in 1997 it had a limited audience, was hard to find, and was promoted in a review of books section of the newspaper. Not ideal.

Books became a better business model. They’re better placed: physical or digital. Promotion is more focused, specifically with the rise of podcasts. But Child still has ‘his biggest fan’ come up on the street to ask when his next book is out. It’s out now, he tells them, go buy it!. The product, for the right authors too, has never been better. But best sellers are not blockbusters.

Businesses ask: Where to direct resources? Through contrast, the bullseye model highlights the trade-offs.

Part one of Batman was looking at the movie industry from 1975-Marvel in the Batman BATNA post.

Tim Leatherman was in Vietnam in the 1970s. He noticed that all the Japanese motor bikes had luggage racks for transporting goods but that all the Vespa scooters did not. So with the help of his brother-in-law, Leatherman designed and built one hundred racks for Vespa scooters. He arranged for consignment distribution and hired someone to pass out leaflets.

It seemed like a good fit. There was demonstrated demand. There were motorbikes everywhere! “But when we left Vietnam there were still 97 in the bedroom of our house. It turned out that the people who rode Vespas considered themselves a class above and they had maids who went out and did the shopping.”

Tim wanted to design a knife with pliers, patent it, and license the idea to the major knife companies. Once he had a working prototype he went to Gerber but they declined, saying it was a tool and not a knife. Everyone knows not to bring a tool to a knife fight. Ok, thought Tim, I’ll pitch this to the tool companies. “And the message I got back from them was, ‘Sorry this is a gadget and gadgets don’t sell.'”

In this case the knife and tool companies confused the category for the job. Much like a hardware company might think they are in the business of just making quarter-inch drill bits when really the customer wants the quarter-inch hole.

The JTBD of Headspace is feeling better through action. The JTBD of dining out is food and atmosphere. The JTBD of Jazzercise was dancing and a dancer’s body.

‘Jobs’ is a great mental model and thanks to Leatherman and Raz for sharing another pair of examples.

David Henderson recalls his first class with Armen Alchian in 1972, who started class noting that if someone understands the incentives they can understand a lot of ‘mysterious’ behavior.

“On the first day of class he said when we went to the bookstore we’d be in a long line and we’d be angry about that. But we shouldn’t be. We should be happy because it means economics works. The people working are on a standard wage and they don’t have a strong incentive. There’s no ownership, no one gets a big benefit if they do better.” – David Henderson, September 2021

We should be happy to wait? Kinda.

One theme around here is the value of curiosity. Mostly that means to wonder how and why and when things happen – or even when they don’t happen. And incentives are ripe for thought.

Incentives come up so much because one way to be curious is to ask: why does that happen? and part-of-the-reason that happens are the incentives.

One of the highlights of my interneting has been writing a post about curiousity for Ribbon Farm.

One way to support this time is different… is to say that the technology has changed. The smartphone’s GPS, camera, and chips all allowed a slew of businesses to serve customers in new ways.

Another way to see change is to ask the Bob Pittman question: is this another one of these? MTV followed from the idea of narrow-casting radio stations. If there was a rock station, country station, oldies station and so on on the radio shouldn’t there be something like that for television: a news station (CNN), a movie station (HBO), a music station (MTV)? This too was a technology shift.

“I believe there’s not a single sporting event or concert in ten years that the ticket is not an NFT. There’s no incentive for that organization or artist to launch it as anything but an NFT. A QR code or piece of paper means nothing. But if Luka Doncic drops a hundred points in that game it becomes a forever collectible. There’s a trillion-fucking-dollars worth of ticket stubs that have sold on eBay over the last twenty years.” – Gary Vaynerchuk, My First Million podcast, August 2021

A third way to consider change is to ask about the business model and the incentives. Sport is not a competition, sports is entertainment. Bob Iger wrote that he learned this lesson working the 1974 Olympics. “We weren’t just broadcasting events, we were telling stories.” There’s only one sport honest about this.

Are NFTs a new technology? Yes. Is this (NFTs) ‘another one of those (collectibles)’? Yes. Does the business model allow for this kind of innovation? Yes!

Ed Thorpe is in graduate school and has a professor who is ‘mailing it in’. In class Thorpe stands up to the instructor, demeans him, and is threatened with expulsion. Needing to stay in school, if only to avoid the Vietnam War draft, Thorpe crafts a careful apology:

“I explained that I’d come to realize his teaching methods were unique and that students, though they may not always appreciate it rarely encounter a professor of his caliber. What I said was true, but allowed more than one interpretation.”

Book: A Man for All Markets