Steven Kotler (@kotlersteven) joined James Altucher to talk about why the future is brighter than we think, how people can be better than they are, and why 4% is the magic improvement percentage. The interview begins with James saying he’s a “huge fan” of Abundance: The Future is Better Than You Think, which Kotler summarizes as an explanation of “the four emerging forces that make it possible to raise global standards of living.”

He shares with James that the growing DIY fields is one and simpler technology is another. Ironically enough, while listening to this interview I was browsing Pebble watches, but it’s not these sorts of projects that Kolter is talking about. His big question is “Are you working on something that will change the world?”

One angle on this, Kotler suggests, is to find the right key that will unlock some of our untapped resources. For example:

If radio wave communication was a technology breakthrough and logistics and refrigeration were food transportation breakthroughs, then solar power will be another great one. Solar, Kotler says, will be the domino that starts the others falling. “Vertical gardening and in-vitro meat” will both be possible with cheaper energy. And he suggests we hurry.

“Losing our ecosystem services is one thing we cannot come back from as a planet.” Kotler tells James. Nassim Taleb mentions much the same thing about GMO food. It’s a good example of the fragility and limits that Taleb talks about. Everything is antifragile, up to a point, and our eco-systems are included in that. In his talk with Russ Roberts, Taleb makes the point that the antifragility of systems depends on the fragility of the individual. In nature this means that certain patches (seeds, areas, forests) fail so that others can succeed. Kotler and Taleb are both worried that GMO seeds may narrow the scope of individual diversity and also the scope of system fragility. 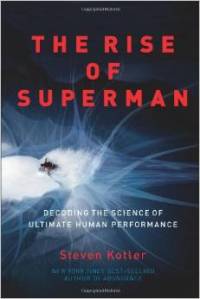 Once they get back his first book, James moves on to questions about Kotler’s book, The Rise of Superman: Decoding the Science of Ultimate Human Performance. This book is the summary of Kotler’s research on flow and what is the flow state, which he says, “the simplest thing to know is flow follows focus.”

Flow is not Kotler’s idea, and he admits as much saying the idea has been around for over one hundred years. His work mostly builds on that done by Mihaly Csikszentmihalyi, who began down this path, at the start at least, because he was broke.

In this TED Talk, Csikszentmihalyi says that he was on a ski trip when the snow melted. Not having enough money to go to a movie, he went to a free talk by some psychologist who was proposing that the recent UFO sightings in Britain were a deep seeded fear from World War II. Csikszentmihalyi thought that was at the very least an interesting proposition and began to wonder why people thought this way, and “what contributed to a life worth living?”

As he spent more time researching happiness and a good life he saw that happiness that happiness did not grow with the economy. The former has remained the same, the latter has doubled over the past fifty years. Okay, he thought, who can I examine that shows this divergence? Who is happy despite not a lot of money? Creatives!

So Csikszentmihalyi began to look at scientists, authors, and musical composers and found people reported two things that made them happy; helping others and doing work that makes you happy.

Adam Grant (episode #73) told Altucher the same thing matters for givers. Successful givers, Grant found out, gave in ways that they were skilled at and meaningful to them. Those types of givers succeed in their careers whereas others who gave outside their scope of meaning and expertise did not.

Daniel Kahneman has also written about well-being and echoes the above points, adding something else. Your situation matters. Too little money can drag down your happiness level. Too much money (whatever that means to you) can’t lift it up. Other things that tend to drag people down is the workweek, kids, and cleaning. How, when, and where can all influence how content/happy/well you are in life.

The flow state – one of many irons in the happiness fire – doesn’t come immediately. Csikszentmihalyi says that “to change something in a way that’s better than before” takes ten years of immersion. Oof, that’s not easy, but it’s not odd to hear this. Many of James’s other guests have noted that things take time.

Each of these guests spent years growing their skills to the challenge and enter a flow state. My guess is that challenge is synonymous for value, and once you have the skills for a high challenge area, you will find success. My skill at scrambling eggs is about up to the challenge of making them in the morning, but the value in this is about $8/hour.

James comments that this – flow – sounds like a great idea and suggests that it should be taught in school. Kotler says that it’s being taught, but not in schools. Microsoft, Facebook, and other technology companies teach it in one way or another. The best innovation coming from Silicon Valley, Kotler says, isn’t technology, it’s how to work.

Kotler discovered flow by looking at extreme athletes and wondering how they could prepare to do what they do. There’s not many simulations that put you in a dangerous position like this:

What Kotler discovered what that these athletes found a flow sweet spot (probably by accident) of about 4% better. Higher than this and it can lead to the flight or fight stage, where you aren’t in the flow state. Lower than this and it’s not hard enough to get you there.

Finding flow is possible for anyone Kotler says, telling James that for him to jumpstart his flow state, he might try to copy the style of another writer or become more vulnerable in his writing. James gives similar advice, saying:

“I don’t push publish unless I’m somewhat afraid of what people will say when they read it.” – James Altucher

“If you look at someone from the outside and they have a successful business or blog and a podcast and you’re like wow, there’s no way I could do that. I felt exactly the same way…. but jump in anyway.” – Ramit Sethi

Kotler says the same thing about seeing someone ride a big wave, “what you forget about that guy is that there were weeks and months of three foot, and four foot, and five foot waves.” Those little (4%) improvements add up, in fact they double over twenty periods. 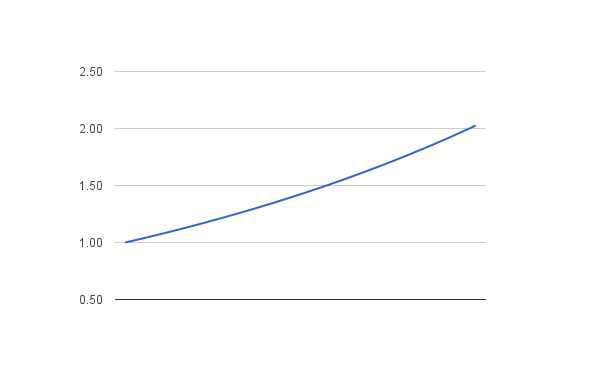 Toward the end of their interview, Kotler tells James that he got interested in the flow state after spending three years in bed with Lyme disease. It took surfing for him to break out of a condition that medicine couldn’t cure. Brad Feld (episode #91) echoed this idea in his interview with James, saying that we need to find our own unique solutions.

Thanks for reading. After each 10th episode I include a link to donate. If you are a regular reader and would like say thank you financially, you can do so here.

One additional note. Something about Kotler’s interview that struck me was how much terminology he used (In-vitro meat, transient hypofrontality). He does a nice job explaining those things, but a lot of terminology can be a BS signal. In Crimes Against Logic, Jamie Whyte argues terminology should do two things, bring clarity and testability. For example, to say something is burning in the oven has meaning. Something burning up the charts does not. The latter makes sense to us, but it can’t support an argument. This isn’t to say Kotler is wrong, I have no idea, just a reminder for you and I to smell if something’s amiss when we see a lot of terminology.

Reading notes: The story of how wireless was discovered was in the very good Thunderstruck by Erik Larson. The banana peddler became the banana king, as told in the – also very good – The Fish that Ate The Whale.