This post is available in podcast form on Soundcloud and iTunes.

I didn’t always think this way.

Only recently have I come to realize that the tools don’t really matter. It’s fun to think about new tools and I still check out links like “the best pocket notebooks” but I know these are marginal improvements (we’ll call this moving from  1 to 10 in the grid of success). It’s not my story that demonstrates this best, so let’s meet our characters.

– Casey Neistat; award winning filmmaker, vlogger,  “the guy who snowboarded through Times Square in 2016,” and founder of Beme.

– B.J. Novak; actor and writer on The Office, author of The Book With no Pictures, and founder of List App.

– Gina Trapani; creator of Lifehacker, podcast host of This Week in Google, and founder of Todo.txt.

The tools you need to create something, whether it’s apps, books, or  anything do not matter. What matters is the work that you need to do with those tools.

Casey Neistat creates a daily vlog where he talks about life, New York City, and making things. In the vlog Casey Neistat’s Guide to Filmmaking he addresses tools specifically.

“Gear doesn’t matter….If all it took to be good was the right equipment, the people who had the most money would always win. This is a movie called Pan, it premiered this weekend. Now if all it took to make good stuff was to have the right equipment, trust me, whoever made that movie with their $155M budget had way better cameras than you could ever afford…story is all that matters. Story is golden”

He tells Tim Ferriss that he buys Moleskine notebooks and “If I’m taking a walk or having a drink with a friend and some funny idea comes up, I write it down and I never judge ‘what would you do with this idea’ or ‘how would you end that joke.’”

After that he’ll sit down with a notebook and develop some ideas on the computer. For that he uses Microsoft word.

“I use Microsoft Word for same reason my dad used Wordstar, it’s just what I learned and got in the habit of, and I use final draft for screenplays because everyone does. I would like something that kind of combines the two, but it’s not worthy it to me to investigate and switch.”

Novak has notebooks anyone can buy and prefers one brand of software because that’s what he “got in the habit of.” Again, gear doesn’t matter.

Gina Trapani too has a system that’s not about the tools. At Product Hunt she was asked what language she would code in if she could only code in one language for the rest of her life.

“This is an interesting question. I’ve had a real affinity for the language I’ve cut my teeth on, it would be Java. I enjoy coding in the language I feel most proficient and comfortable in and I think Java would be the top one.”

She’s also shared the tools she uses, and it’s a pretty generic list of things. An IDE for code is more valuable than a plain text editor, but there’s a place for plain text – like her app Text.app. Trapani’s focus is to do good work, the gear doesn’t matter.

If you focus on the gear you’ll get caught on the product treadmill. Each new things is great until the next version comes out.

Each new iPhone is awesome, but it’s never a monumental leap. Neistat goes on to say that if you can’t afford a camera to just use your phone, it’s really good. Tools only move the needle from 0 to 1.

The matrix of tools and product.

The only thing that’s not up to you is the tool that gets you started.  This doesn’t need to be perfect, just functional.  Neistat uses Final Cut Pro, Novak uses Microsoft Word, Trapani uses Eclipse. Each of these pieces of gear gets them started.

A developer friend was telling me that he writes plugins for the coding tools he uses. That’s the next phase, 1 to 10. It’s in the phase that you get comfortable using the tool. Novak explained that after he takes notes in the notebook he sit down and fleshes out the ideas. He’s learned how to use his tools.

From there we move to doing the work. Making movies, writing books, creating podcasts. Whatever the work is, it’s constitutes the bulk of the grid of success: 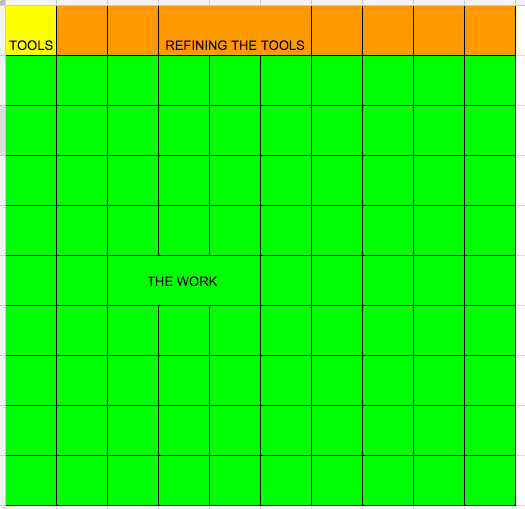 – The yellow box is the tool. That box holds the “27‑inch iMac with Retina 5K display” and the computer at the public library. It also includes fancy cameras, cellphone cameras, and film cameras. The tools you use make up 1% of the grid of success.

– The orange boxes are how you use the tools. You need to know how to use the iMac software, and how to use it well. If you’re a photographer it’s knowing what Instagram filter is better than another or the rule of thirds. If you’re a writer it means knowing how to spell words and spin a good story.

– The green boxes are the work you have to do with the tools. That’s writing the blog post, filming the movie, or cold calling clients. This is the bulk of what it takes to be successful.

Conclusion. You can think of the things you produce as a formula; tools  x work = output.

Some people tweak this equation by limiting the tools they use. Christopher Nolan doesn’t use email or a cellphone. Neil Gaiman writes with fountain pens in a cabin in the woods. Philip Roth, George R.R. Martin and Stephen King all have the basic gear, just like our characters above.

What really leads to success is doing the work, not the gear.

Thanks for reading, I’m @mikedariano on Twitter. Thanks to @Lepolt and @DukeCavinski for setting me straight on a few things.

Justin Jackson’s podcast Mega Maker and John Saddington’s Tomo both inspired some of the thinking behind this post as well. If you liked this style of post you may like what they’re doing too.

One thought on “Gear doesn’t matter”