Brian Scudamore told the founding story of 1-800-GOT-JUNK on the How I Built This podcast. It started when Scudamore needed cash for college and saw another junk hauling business. He bought his first truck, called the competition to figure out pricing, read the classifieds and started. Soon he could afford two trucks, then three. Very soon the business was teaching more than school and Scudamore dropped out.

He parked his trucks at busy intersections and kept track of what areas led to more leads. In addition to these mobile billboards his got free press from the local papers when, on his girlfriend’s suggestion, he called and said that his business might be worthy of a story. The paper sent a writer and photographer. The latter said, ‘you guys are going to be busy tomorrow,’” and they were. Up to this point, the business was grown on cash flow, though other challenges soon rose up.

The biggest was a series of hiring mistakes that led Scudamore to clean house, going from 11 employees to 1 – himself. He had to park the extra trucks and field all the calls, but this rip-the-band-aid-off approach needed to be taken. How did Scudamore know he had made a mistake? “I was avoiding spending time with my employees and I had the wrong people…nine of my eleven staff were the wrong people.”

With success, Scudamore enrolled in a young entrepreneur organization and at a meeting, he found himself envious of his peers who worked in ‘cooler’ businesses (read: NOT BORING). “I found myself feeling sad because I was comparing myself to others and I didn’t feel good enough.” So Scudamore went off to dream up a list of BHAG’s for his company. This has continued today with the “Can You Imagine” wall at headquarters. 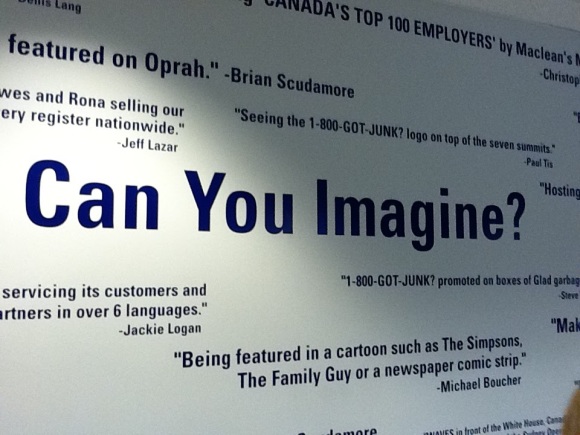 Scudamore’s goals centered on expansion to all the North American markets larger than the one he started in (Vancouver). He didn’t know how to franchise, so he just called people who had done it. This “just call somebody” attitude came up in other interviews he gave.

First, he expanded to Toronto but when it came time to come to America he needed to rebrand from “Rubbish Boys” to something better. The Got Milk campaign was popular at the time as well as the 1800-FLOWERS ads. Scudamore combined the two and thanks to some elbow grease – rather than money – he obtained the 1-800-GOT-JUNK number.

With the expansion were growing pains. Scudamore and his first CEO were “type-A” personalities. This energy was crucial during the cold-calling, door-to-door early days but with expansion and the franchise process, the company needed someone with a calmer hand at the tiller. He eventually found that person and the business has been great since then.

Two books Scudamore suggested were The E-Myth Revisited (“The E-myth Revisited is all about a philosophy of people don’t fail, systems do…you can’t overcomplicate things. I think systems need to be simple.”) and The 22 Immutable Laws of Marketing.

Thanks for reading,
Mike

Hey, one more thing. If you liked this shorter style of post with fewer links and explicit connections let me know on Twitter or via the contact page.

If this had been a longer style post there would have been connections to; the importance of low overhead, branding, culture, hustle, and runway.

One reply on “Brian Scudamore”

[…] pull the shades down because I didn’t want to work with people there.” As Mohnish Pabrai and Brian Scudamore noted, if you aren’t excited to go to work something is […]