Recently I had to take our family golf cart in for service.

That seems odd, but we live adjacent to the largest retirement community in the United States. There are over 100 miles of ‘multi-use paths’ for walkers, runners, bikers, and golf-cart-drivers. Have you ever gone to dinner, the library, or home from elementary school on a golf cart? It’s awesome.

The service station was three miles from our house and so I ended up walking home. As I strolled, cars and carts zoomed past and I marveled at the efficiency of an internal combustion engine.

Later that same day I read this from The History of the Future:

“With web forums, chat rooms and a motto of “Learn, Build, Mod,” ModRetro sought to attract the world’s best, brightest and most curious portabilizers. And for the most part, Luckey’s community achieved that objective.”

Toward the end of 2019 on Twitter there was a thankfulness on the platform. I’ve met some of the most thoughtful, kind, insightful people. It’s really amazing.

Both the engine and the internet increased productivity.  Throw in some other major changes and we get a picture of the growth. 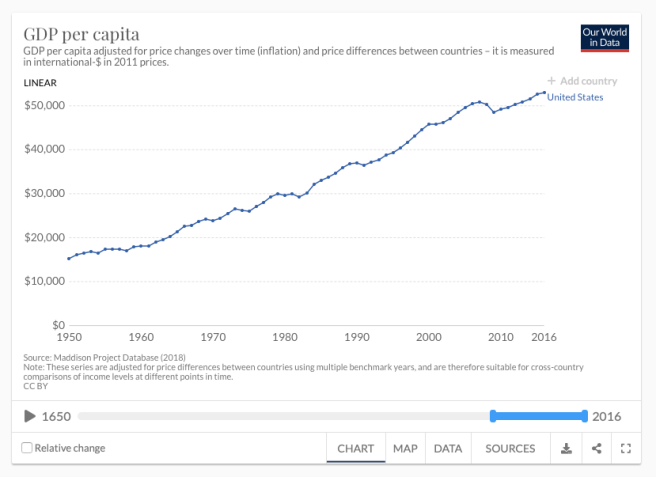 That low hanging fruit has been picked, sorted, canned, jammed, and consumed. But here are some ideas for tools for 2020 and beyond.

These three tools are guaranteed to help because there’s nothing here to sell. It doesn’t matter which health program, plan, or path. There’s no software for writing or specific code for technology.

I’m a sucker for the shiny new app, service, or technique for X. But the best results may come from the compounding of all the things we already do.