One of Tyler Cowen’s suggestions for thinking better is to avoid mood affiliation. From 2011:

“It seems to me that people are first choosing a mood or attitude, and then finding the disparate views which match to that mood and, to themselves, justifying those views by the mood.”

This is clear in politics when people judge ideas on whichever party is blaming/praising on whichever media. Rather than the easy pickins of politics though, let’s journey a sunnier path: cruising.

Cruise ships are awesome. Many miss this thanks to mood affiliation. It’s not their people. It’s not their food (buffets!). I don’t want someone to dictate where to be and when is the comment I hear the most. Some non-zero number of people look at a cruise vacation and decide they don’t like it and then come up with reasons for why.

But cruises balance flexibility with stability. The only rules are the times the ship arrives and leaves. That’s it. In that window people can do nearly whatever they want. Cruises are like Crocs, they can be as laid back or “attack mode” as the vacationer likes.

Food on cruise ships is good. The buffet is good, especially the vegetarian curry options because that is home-cooking for the international staff. Ships also offer a number of (revenue growth) fine dining options. The best of these are magnificent. It won’t be extraordinarily but how many people prioritize this on vacation?

On board are a variety of options like rock walls, FlowRiders, theaters, slides, escape rooms, and kids clubs. Off the ship are many interesting tours, excursions, and experiences. Private drivers are especially adaptable, this is another Tyler Cowen suggestion.

Look at that form! 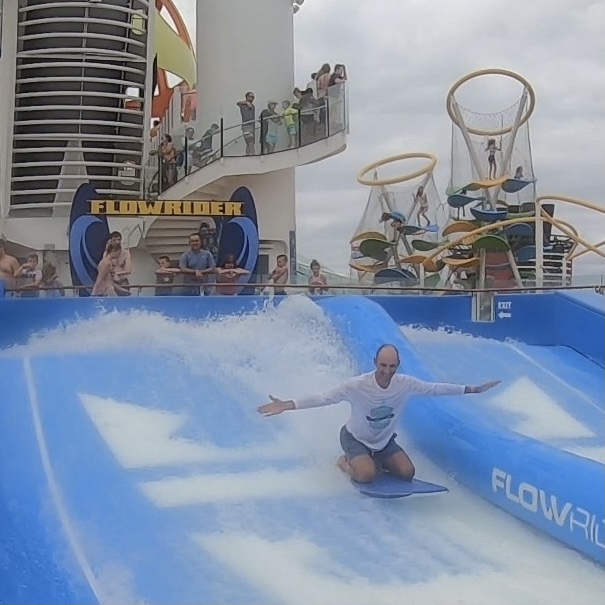 Cruising is not for everyone, but maybe not for the stated reasons. And Cowen, probably couldn’t stand cruising.

One thought on “Cruising mood”