If you know of someone doing better commentary on technology and business than Tren Griffin at 25iq.com or Ben Thompson and James Allworth at Exponent.fm please let me know.

Each post or podcast is like the idealized college course; informational, educational, entertaining, timely, and taught by someone who’s walked the walk. Jocko Willink addressed this specifically on Twitter:

There has never been a better time to want to learn things. Wow.

Exponent episode #108 from Thompson and Allworth was about artificial intelligence in technology and they go into the issues much better than I could. Our goal is to back out and look at some of the bigger ideas.

1/ Technology. The episode is about the growing pains between no artificial intelligence and ARTIFICIAL INTELLIGENCE. Much like Tyler Cowen wrote about the industrial revolution, the end may be nice but getting there may be messy. Some areas will see this shift before others.

“Any space that has any sort of routine work and generates data is very susceptible to this,” says Thompson. “Data is what allows the learning to take place. It’s the application of these learning algorithms to data that allows this sort of intelligence.” We’re early in this shift Thompson says, right now it’s “basically statistics gone wild.”

Allworth is more precise with a prediction:

“There’s this fascinating NPR article and it’s a map of the most common job in every state over time. There are lots and lots of secretaries in the 70’s and 80’s. Fast forward to 2014 and the most common job in every state is truck driver. They’re everywhere. Look at this big push, all this money, that’s chasing autonomous vehicles. All those jobs are at risk. It’s the same thing you just described, it’s routine and there’s lots of data.”

We can look at another technology that contributed to drastic changes, The Box. But first, checkers.

One of the first games my kids learned was checkers. Their favorite part is the double (or triple) jump. This is when instead of capturing one piece, a player captures multiple pieces by consecutively jumping the opponent. Kids love this. One day, my seven-year-old daughter double jumped and landed in my back row. Not only did she get the thrill of the double jump, but she got a king as well.

When we play, I sprinkle in these opportunities but don’t point them out. The conditions exist but my daughters have to find them first. Business success seems to be like this. A founder is in a game of checkers and if they can see a few moves ahead they can wisely position their business. This is what happened with the shipping container. Once that move was made, a flurry of events followed that changed the game.

Here’s what Ian Cassel wrote about the man who created the container. “Malcom McLean is known, or actually unknown, for having reinvented the modern world of global trade…His impact on transportation is right up there with Henry Ford and yet his story remains relatively unknown.”

McLean invented the shipping container and the ships that moved them around the world. With this change, entire industries vanished. From 1967-1976 New York City lost one-third of its manufacturing jobs. Another victim was the garment industry. “With an ample supply of cheap labor and a well-established distribution network, New York was prepared to meet the demand,” at the turn of the 20th century. But shipping containers changed the rules for labor and distribution. Of course, with shipping containers, dockworkers also saw their jobs go away. It was contraction through attrition.  What used to be a good job that employed generations of men in the same family became unavailable.

One change – from bulk and crate shipping to containers – but many effects.

Technology is like a river. It allows for an ecosystem to grow around it. New York City was a great place for making clothes because there was labor (many people, minimal cost) and a good port. The technology of the shipping container changed this is in a big way.  It rerouted the river, and when one ecosystem died out another grew up.

“It’s the big picture versus the little picture thinking. Being worried about general intelligence is being worried about the big picture, the extinction of the human race….but for now there are lots of under the surface, smaller picture worries. By smaller picture I mean, very big large massive problems. We can talk about the other problem too, but there’s a lot of talk that needs to be done about this problem.”

“That framing of top down, bottom up is exactly right,” Allworth says, “I hadn’t thought about it like that until just then it’s such a fantastic articulation.”

Inverting is thinking forward and backward about problems and can be a helpful tool for solving sticky situations. When Allworth reframes a situation as being bottom up, he’s flipping the point of view.

When Ken Grossman ran a bike shop he had no college education and barely got through high school. It could have been helpful to take night classes on running a small business (the top down approach) or he could run his own business and learn on the go (bottom up). Grossman did the latter, and it worked out well because he saw another bike shop go out of business and learned what not to do.

“If you want to understand something, take it to the extremes or examine its opposites.” John Boyd

There are valid points of view from both the boots on the ground and from thirty thousand feet and we can use both perspectives to answer questions.

“What are they going to do when no one wants their CAT scan read by a human when the machine does it better – did I just get on a soapbox?” – Allworth

Even in a podcast – a technology river itself – we still allude to old ideas. According to Wikipedia:

Throughout the 19th Century and into the 20th, prior to the invention of corrugated fiberboard, manufacturers used wooden crates for the shipment of wholesale merchandise to retail establishments. Discarded containers of every size, well-constructed and sturdy, were readily available in most towns. These “soapboxes” made free and easily portable temporary platforms for street corner speakers attempting to be seen and heard at improvised “outdoor meetings,” to which passersby would gather to hear often provocative speeches on religious or political themes.

If “tweetstorm” every replaces this I’ll be tempted to become Captain Fantastic myself.

“The problem is that, the best writer in the world can be read by everyone, the best artist can be viewed by everyone, the best music can be heard by everyone. There’s no, ‘all the different courts of Europe will be patrons of the arts’. There’s going to be the best. The best dominate in a world of zero cost distribution. The story of technology broadly and practically of anything digital is the dominance of the up front fixed cost winner.”

This was the case for the shipping container. Ports, ships, and companies are all a winner-take-all situation. 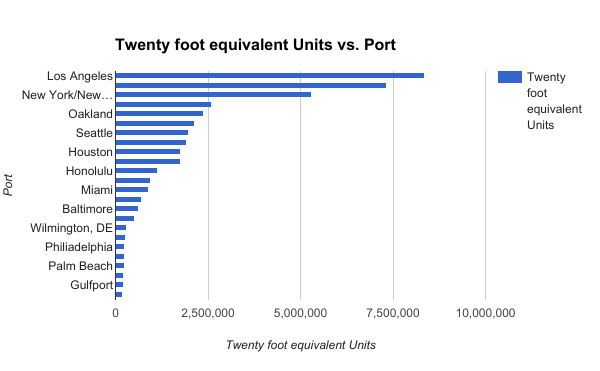 Writers then too will be a winner-take-all. Gulp.

But people like this blog. Why do people read this and not Thompson? Thompson is right that in a world of “zero cost distribution” the best dominate, but best is subjective. My favorite podcasts aren’t yours. Businesses that define themselves as best in class/niche can survive. A local newspaper that does great work can survive in the internet age.

And “best” is flexible. Right now Facebook is the best social network, but I spend more time on Twitter. Someday it will be something new. Twenty years ago, writes Michael Lewis, in The New New Thing it was Microsoft this and Microsoft that. The Seattle titan was going to eat Yahoo, reshape the healthcare industry, and barrel into anywhere else they wanted. Only they didn’t.

Winners take all but only in categories and for the moment.

In Cowen’s 2017 book, The Complacent Class he writes about this as a contributor to the stasis. “In other words, it is harder for new firms to get up and running, but successful firms stick around for longer; both are signs of stasis.” Thompson warns against regulatory tailwinds (or moats).

Thanks for reading, Mike