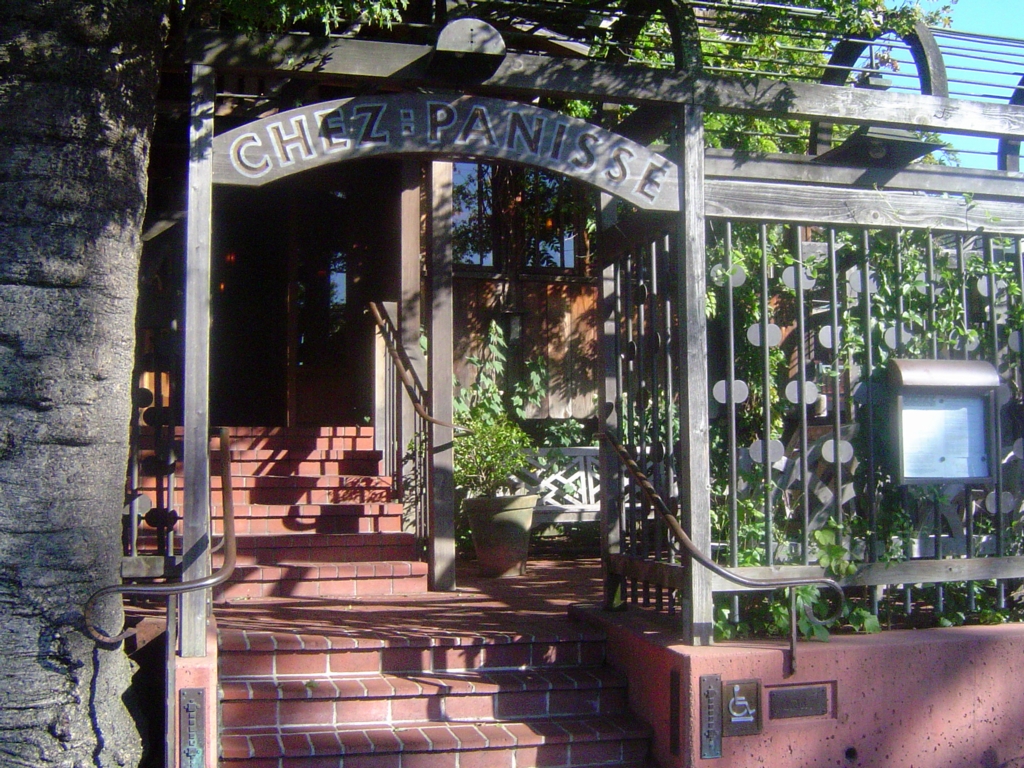 The tldr version of this post is that Alice Waters started Chez Panisse with obliquity. She knew what to do thanks to a DIY education, lots of (failed) experiments, talking with others (including customers), and keeping her cost low. Her differentiated product focused on a few key things and she hired independent employees.

Also, Alice owned her building, Tren Griffin addresses this in his post on wholesale transfer pricing and restaurants.

Kay writes that the biggest brands in the world all started as small companies with big ideas. It was about design or culture or feelings. When I think about Apple, Coca-Cola, Nike, Subaru, WordPress, or NYC I sense an essence. That’s what founders, like Waters,  aim for.

“How the slapdash, make-it-up-as-we-go-along little hangout and its harried mistress became such icons is a story of adventure, misadventure, unintended consequences, steel will, pure chance, and utterly unrealistic visions.”

“Alice decided to cook her way straight through Elizabeth David’s French Provincial Cooking. The book was about more than just good recipes. It portrayed a way of life — honest, elemental, caring — from which a tactile, sense-engaging way of making food emerged as naturally as a plant form the earth.”

“Alice knew, at last, what she wanted. The Montessori way – direct sensory experience, experimentation, optimism, confidence – would be the way of her restaurant. As for the practicalities, she had no specific ideas. She had never heard of a business plan. She had only faith that things would fall into place.”

The restaurant’s goal was “to evoke the sunny good feelings of another world that contained so much that was incomplete or missing in our own.”

Waters had a grand vision for what she wanted her little place in Berkley to be. She got there by bypassing the traditional education system. In high school:

“I cried at my desk…I felt I was just not smart enough.”

“My grades were good generally but I was distractible.”

She graduated high school and enrolled at Santa Barbara. It was too much of a party school. A friend and the culture pulled Alice to Berkley. From there she traveled to Europe. She kept learning, just not in the classroom.

“The dreary classrooms of the Sorbonne versus a joyous immersion in French cuisine in the sparkling, spotless dining rooms of Paris’s restaurants – for Alice it was an easy choice.”

“But I got the whole French aesthetic, from beginning to end. What those thick curtains looked like, what the fruit bowl looked like, how the cheese was presented, how it was put on the shelves, how the baguettes twisted. The shapes, the colored, the styles. Everything in Paris was magical to me.”

Waters traveled with friends and learned about food, culture, restaurants, hosts, and gardens. Back in California, the people came to her; she met filmmakers, foreign students, and academics. The DIY education paired well with Alice’s temperament.

She found a house in Berkley, but with no money had to beg and borrow from everyone she knew. But she kept a low overhead and spent 1971 looking for supplies in flea markets.

Alice knew – unlike some starups – that she had to talk to her customers.

“Alice had good reason to believe there would be a public for her cooking. Nearly everyone who had come to dine at the little house on Dada Street said that hers was some of the best food they’d ever tasted.”

“I was in the dining room, and I knew what things people were really likening, or how they were reacting to special little things that we’d try for just a few people, and I would feed that back to him.”

She knew what people wanted thanks to a lot of experimentation.

“We were willing to fail, which is absolutely essential to any kind of learning. Truly momentous disasters occurred on a regular basis, both in my artwork, which I destroyed and in her cooking, which she destroyed.”

“Jeremiah would try anything…Fuckups? We had a few. More than a few.”

The testing was what allowed Chez Panisse to be different.

“Much of the food that Alice loved most was la cuisine du marche – market cooking.”

The Chez Panisse hunter-gatherer culture “was was something that no American restaurant had ever done.”

In the first year of the restaurant Waters drew her line in the sand. She found what the most important things were.

“That’s what distinguishes a great salad from a good one — a great one is alive.”

Good ingredients and good cooking of French recipes with small twists was the menu for the early years of Chez Panisse. This wasn’t an easy thing to prioritize. Great ingredients meant new logistics, new inventions, and new processes. Guided by obliquity, Waters didn’t care how long it took or how much it costs. This took a lot of non-glamorous hard work.

About the first year, “It was a train out of control, a wreck about to happen.”

“Nearly always, Chez Panisse managed to present a calm, contented face to the world. Nearly always, there was something going haywire behind the scenes.”

Said a friend, “That’s how I think of Alice…always moving so quickly…She has never wanted to stop. She’s is not a contemplative person.”

Through hard work and word of mouth the restaurant grew it’s top line revenue, bottom line revenue, and bottoms in the seats. With this Waters hired more people. She found that serving great food didn’t necessarily mean food service skills. Instead, Alice looked to hire someone with esprit. Once hired, you operated under the Chez Panisse decentralized command.

“If a waiter, or even a buster, wanted to try cooking something, that was fine – though it would never appear in the dining room unless it passed Alice’s unsparing review.”

Alice went through extensive training with new employees so that once they started they could function on their own.

“When somebody would start, I’d take them into every little nook and cranny. They’d have to go into the narrow closet to see how narrow it was. They needed to go outside and see how we took care of the garbage…How hot it was in front of the ovens. How it all felt.”

“After just a couple of weeks, Alice trusted me to do it on my own — that’s one of her characteristics, to trust people. She’s less worried if you don’t’ have the competence if your heart is in the right place and you’re shooting for the right aesthetic. I got in over my head, as did Chez Panisse constantly.”

Waters wasn’t absent. She understood that she didn’t have all the answers and only in brainstorming with the staff would they settle on the right dish.

“The kitchen staff met early every afternoon. The first order of business was to compare what was on the published menu with what was actually in the house. If salmon was scheduled for Friday night and the salmon that had come in that morning was, in Alice’s opinion, anything less than pristine – well, did anyone have a suggestion?”

Early feedback from one patron pointed out that some female servers weren’t wearing underwear. Waters didn’t care. She wanted chic. It was all in service of the spirit of Chez Panisse.

Over time Alice got better at; exploring, cooking, listening, and managing. But this excellence came at a cost. To get 10,000 hours you need support.

“Finally, Alice had to choose between Tom Luddy and Chez Panisse. No one was surprised when she and Tom parted ways — she was married to the restaurant, and both she and Tom recognized that she could never give him the time and attention that he required.”

“She had yet to meet a man with whom she could imagine having a child. Her most recent lover was a cook at Chez Panisse, handsome and sexy and smart and focused — and fifteen years young. She had hardly ever found a boyfriend outside the restaurant, so total was her inhabitants of it.”

Thanks for reading. I’m mikedariano.