In his book on market crashes, Scott Nations does an excellent job explaining what happened. While reading I returned to Sanjay Bakshi‘s idea of part of the reason thinking. When cause and effect are hard to untangle, understanding comes from a full picture. Nations does a great job of untangling, separating stories from reasons, politics from populations.

There are patterns to the highlighted crashes. They begin with a catalyst. Nations believes in the Uniquity thesis. In that book, Mark Buchanan looks at how forest fires, earthquakes, and extinctions might relate to economic instances. “In the critical state, the forces of order and chaos battle to an uneasy balance, neither ever fully winning or losing,” Buchanan writes. 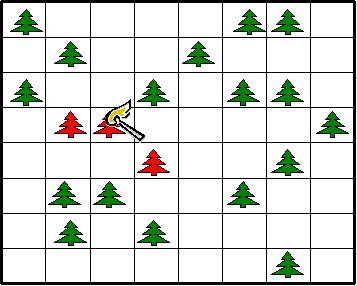 Buchanan asks questions like; If a match is dropped on a random square what are the chances of a fire? If one, how severe? The answers depend on the build-up to the critical state, that balance between order and chaos. In Scott Nations’s book, it’s the same thing, down to the catalyst.

It’s like a bumped domino. Sometimes there’s not enough trees (above) or dominos (here) for things to spiral out of control. Sometimes there are, and that’s usually because, Nations writes, “each collapse has been fueled by a new, poorly understood financial contraption that introduces leverage into a system that is already unstable.”

In the early 1900’s it was the investment trust, in the 1980’s it was the leveraged buy out, in 1929 the Jone’s were jonesing to trade. Leverage made each instance worse.

“In 1907 it was the trust company, a hedge fund dressed as a savings and loan. In 1929 it was the levered investment trust, a massive stock market wager with little room for error. Portfolio insurance was another of these contraptions, though it would take more than a decade to metastasize”

People back then were so dumb. Right? Wrong. Each idea; trusts, LBOs, insurance, hedges, credit default swaps began as a sound idea.

It’s when those sound ideas are taken to extremes that problems arise. Each innovation makes an assumption about the world. On a small scale, those assumptions are fine. On a large scale, they are not. Often those assumptions were about liquidity. Again and again, in the book, a model worked so long as there were buyers and sellers. But when the shit hits the fan the buyers stood on the tables while the sellers hid under them.

A few leveraged participants don’t make a crash. It’s when everybody gets in that things get messy. That happens too. The Liberty Bonds normalized investing and was part of the reason people became interested in the stock market. The LBO corporate raiders were part of the reason stocks ran up, as people hoped they held an acquisition target. Each additional participant was like another breath into a balloon. The system stretches then snaps.

If this were a recipe what would it look like?

There was one idea I kept thinking of while reading this book: Bitcoin.

Nations’s writes, “Despite their differences, Pickens and Icahn seemed to be reading from a book that no one else understood.” This is what I thought listening to Patrick O’Shaughnessy’s Hashpower Documentary. Not only that, but so many of these factors line up with cryptocurrencies. They’re financial products most people don’t understand. They work in one instance but are untested in the wider world. The masses aren’t in but will they be and will there be leverage? What kind of worldwide catalyst could destroy or inflate them?

The book doesn’t have the answers and each new crisis is different from the last. This book isn’t predictive and doesn’t try to be. But it descriptive, and for that, it’s a worthwhile read.

[…] How Bitcoin lines up against previous burst bubbles. (thewaiterspad) […]

[…] limited in supply.  Here’s why that may not be entirely true.  And: At it’s core, Bitcoin is a new financial instrument that many of the people investing in it do not fully understan… […]

[…] Pretty much every financial bubble in history can be generally summed up in the following quote by Scott Nations: […]

[…] is a common financial assumption. In our post on five market crashes this was a thread in each tragic […]

[…] plans and non-fiction best-sellers both need liquidity. Financial Crises all have a liquidity component. Owners need to sell to buyers. Reacher needs to leave before the […]