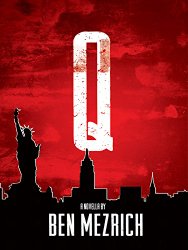 Ben Mezrich (@benmezrich) joined James Altucher to talk about writing, infectious disease, and the real information highway (it’s not the internet, but contains some of the same content). Mezrich has a new book out, Q, “basically it’s about quarantine law and what happened if a crazy Ebola like disease hit New York.”

Mezrich has an exciting bibliography, most notably Accidental Billionaires and Bringing Down the House. I remember reading Bringing Down when I was in college and it nearly brought me to create my own gambling ring, which I was glad I didn’t. Not only was I not as smart as the MIT students – who are the subject of the book – but my constitution to walk through an airport with $200,000 taped to my body was much lower. But it was for Mezrich too. In an excerpt that appeared in Wired when the book was released he writes:

I try to control my breathing as I stroll through Logan International Airport. Terminal C is buzzing and chaotic, an over-air-conditioned hive of college students escaping Boston for a long weekend. I am dressed like everyone else: baggy jeans, baseball hat, scuffed sneakers. But in my mind, I have as much chance of blending in as a radioactive circus clown. There’s enough money hidden under my clothes to buy a two-bedroom condo. And to top it off, there’s $100,000 worth of yellow plastic casino chips jammed into the backpack slung over my right shoulder.

Mezrich tells Altucher that part of the reason he writes books that translate so easily to Hollywood movies is that he’s drawn that those ideas. He says that Gonzo Journalism has always appealed to him since reading Hunter S. Thompson and he says, “that’s how I wanted to write it.” To pursue this style means dealing with the critics; of which there are many. Mezrich’s books read fast – like I suspect he wants – but they also read loose. Know this when you read his work.

But Mezrich isn’t bothered by the criticism. He tells James, “there will be people who debate different pages in it (his books), but overall the people who were in it will say this is their story.” He also doesn’t worry about falling outside of the traditional non-fiction styles, saying, “non-fiction doesn’t need to be written in a single way.”

Mezrich tells James that it took two years of solid writing, 190 rejection slips, and 9 mediocre novels before he signed his first book advance. Then in 2003 he wrote Bringing Down the House: The Inside Story of Six MIT Students Who Took Vegas for Millions, and everything changed. He was on the TODAY show, and in Playboy and Wired and things just took off. Each printing of 1,000 books sold out and he estimates 3 million copies have sold.

Altucher asks him why he didn’t give up at 180 rejections and Mezrich said he was just kind of used to rejection in other areas of his life and he just wanted to be a writer. Even after sketching out other careers, he still planned on how he could write.

A bit of delusional thinking goes a long way in getting things done. Past guest Alex Blumberg (#70) told Altucher much the same thing, that you have to be “stupidly optimistic” and “a little self-delusional.” If you’re still afraid of the rejection part, don’t worry, there’s a game for that. Jason Comely created rejection therapy, the game. You can get his prompts – ask a stranger for gum – to practice getting rejected and eventually he says it won’t bother you. Hear Jason tell his story on the Invisibilia podcast. Altucher himself has a system for dealing with rejection, writing an entire section in Choose Yourself and saying, “Every day, in all aspects of our lives, we are rejected. Rejection is probably the most powerful force in our lives.”

Mezrich began researching Q during the SARS epidemic when he began thinking about who might be the front line of defense in an outbreak. He tells James that it won’t be doctors or nurses, but rather emergency responders. He also says that quarantine laws are “almost unlimited.” The recent case of Nurse Hickox in Maine is the modern example, but there is a precedent for lockdown. In the 1900’s  you wanted to avoid Typhoid Mary who infect 53 people and was forcibly quarantined. Mezrich mentions that Cuba quarantined their AIDS patients in the 1980’s to great success – and he’s right. A National Institute of Health article reports “Cuba’s national AIDS program is the most successful in the world based solely on statistics, and this country also has what many believe is the most interesting program in the world.” It’s not a clear victory because for eight years the government sent all positive HIV cases to the Santiago de Las Vegas AIDS Sanatorium – and kept them there.

Mezrich says this is a big problem because “If you interview virologists and infectious disease specialists, every single one of them says it’s not if but when.” Past guest Nassim Taleb had some interesting thoughts about nature (GMO’s rather than infectious diseases but both include similar themes) in a recent interview at EconTalk.

When Mezrich dives into the details about contagion Altucher asks if this is just the like noticing a blue Honda. Once you buy one, you see them everywhere.

This gem of observation is the availability heuristic, and it is pervasive – when you know to look for it. First, in the context of the interview, Altucher wonders if some of the medical scares we see are a result of media manipulation fueling the availability. For example, which is more deadly, the seasonal flu or Ebola?*  The flu, more than 6 times as many people die from the flu in the United States alone than die worldwide from Ebola. We don’t know this difference because we don’t hear about it. The Freakonomics podcast has a great episode on this and it’s worth listening to just to hear about the connection between Osama Bin Laden and Polio.

Mezrich’s thinking is that Ebola isn’t great, but isn’t dangerous. Respiratory infections on the other hand will be pandemics. He says to look at the seasonal flu and how a small mutation has made it a national news story and while a person could walk around New York City (as one did) with Ebola, a respiratory infection is more likely to spread.

Toward the end of the interview Altucher suggests that Mezrich has a certain style in his writing, welding the high stakes to gray area decisions and Mezrich says this sounds about right. A similar moment occurred in episode #83 with Simon Rich when James noticed that his writing is themed around the absurd meeting the normal. (Do watch the clip for Rich’s new show to see what this means).

Mezrich tells James that The Sun also Rises was his favorite book but that he wrote Q as a fictional book because he “wanted to write something like Fahrenheit 451.” It took time for him to find his own voice, saying he read Bright Lights, Big City “hundreds of times” and when he started out he wanted to be Jay McInerney. This “almost ruined my career” he tells James. This is not uncommon.

Stephen King addresses this in his wonderful book, On Writing, where he writes:

Stylistic imitation is one thing, a perfectly honorable way to get started as a writer (and impossible to avoid, really; some sort of imitation marks each new stage of a writer’s development), but one cannot imitate a writer’s approach to a particular genre, no matter how simple what that writer is doing may seem. You can’t aim a book like a cruise missile, in other other words.”**

Compared to interviews with other writers, this one is notably shorter on talk about writing. One specific exception is when Altucher notes that Mezrich often uses short sentences, to which Mezrich notes that it fits his style of action. This isn’t accidental, it’s literally a writing tool. Tool #18 to be exact. Roy Peter Clark writes about writing tools and suggests that the short sentence serves to do three things; simplify, create suspense, or focus on the emotional truth. Clark writes, “the writer controls the pace for the reader, slow or fast or in between, and uses sentences of different lengths to create the music, the rhythm of the story.”

The conversation nearly ends when the pair talk about the sewer system as the real information highway. I’m not surprised Altucher jumps on this idea as he’s mentioned more than once a smart toilet that gives biometric feedback. Thankfully they end talking about Mezrich’s upcoming book, Once Upon a Time in Russia. Mezrich says it’s “The true story of this battle between oligarchs and this incredible rise of wealth. And Putin.” Seven of the wealthiest men in Russia put a “low-level KGB agent” into power as their puppet but the puppet pulls down the strings. You can preorder Once Upon a Time in Russia (but have your salt ready).

* Now, if you guessed correctly you circumvented a different logical fallacy, system 1 and 2 thinking. If you’ve read this note and this sounds interesting then your next book should be Thinking Fast and Slow which explores all this and more.

**What is so great about that King quote is that he uses the analogy of a cruise missile and then uses the example of Tom Clancy. If you have any interest in writing, you have to read On Writing.

I’m a writer and earn a living by writing posts like this. If you enjoyed it, please consider a $3 donation.

If I missed it, messed it, or meant something else let me know on Twitter, @MikeDariano.