Jim Norton (@JimNorton) joined James Altucher to talk about reworking his routine, being funny as a kid, and why Louie made it big when he didn’t. This interview with Norton proved the adage that you shouldn’t judge a book by its cover because while his comedy can be brash, his thoughts about it are quite refined.

The interview begins with a rundown of their time together in school. It all began – like most pre-teen relationships – over rock music, movies, and chess. Norton wasn’t in school long, he dropped out in high school and says, “I personally left myself with no safety net.” For Norton it was stand-up or bust. At first it looked like bust because “you bomb a lot when you start” he told James. Brian Koppelman (episode #98) said the same thing in his interview. Koppelman began doing stand-up to break out of a creative labyrinth he had wandered into. He told James that part of his success in stand-up was due to the good friends he had around him. Friends he bombed with.

Norton says that he also had to fight off the “voices in my head” that told him how bad an idea this was. A number of guests have hit on this idea of limiting beliefs; Tony Robbins (episode #62), Ramit Sethi (episode #36), and Mark Ford (episode #102) were a few.

The interview is a bit scattered, jumping around from boyhood stories to the current state of comedy, but within that were six tips for everyone.

As Norton continued to climb the comedy ladder, he began to learn the nuances of comedy. For example, he learned that it takes a relationship with someone to make a joke. Telling jokes to James and other childhood friends was easy because they had years of history to draw on. When he’s on stage, Norton can’t start ripping off one-liners. It won’t work. He has to build up a connection to people and relate with them.

Norton also built relationships with other comedians. The interview is a who’s who list of current comedians like Louis CK, Amy Schumer, and Sarah Silverman. Norton has worked with these people on different shows, bouncing around like a pinball.

He also got the benefit of the doubt with HBO because of his relationships there. Norton tells James that he has always had a good relationship with HBO and when an executive that planned a project left, HBO ended up honoring that contract when that’s not necessarily how things are always done.

Good relationships are another common theme with the guests. James Manos (episode #39) says you may as well like the people you work with, since you’ll be with them more than almost anyone else in your life. Gary Vaynerchuk (episode #2) has the more explicit prescription: treat people as if you’ll be a dinner guest at their house tomorrow.

Peter Thiel (episode #43) talked about finding secrets in his interview and said that secrets are usually found where fewer people are looking. Norton says something similar about comedy, noting that you don’t want to do the same stuff as everyone else. If you get ten men on stage, he tells James, you’re going to hear a lot of the same stuff about relationships. Norton, it sounds like, tries to avoid this overlap and focus on being funny in ways that people aren’t used to hearing. He’s finding secrets in the comedy world.

Norton tells James that right now he’s working on removing the emotional delivery from his jokes. Rather than tell an angry joke in an angry tone, he wants the tone to be smoother and for the audience mentally construct the anger that’s in the joke. This is a filigree moment of the career craftsman. Brian Koppelman found another in stand-up, how to deal with hecklers, telling James, “can I be mean enough to dispense with the heckler without losing the rest of the audience.” Both of these little things are necessary improvements to getting better.

Norton also tells James that he watches very few things that he’s been in, choosing instead to keep busy working. Carol Leifer (episode #66) tells a similar story about Bryan Cranston, who would go out for interview after interview between his appearances on Seinfeld. Leifer would sometimes ask what he interviewed for and Cranston often couldn’t remember because there were so many.

Yeah, but that’s stand-up comedy, how does working hard at a job I hate help me? T. Harv Eker (episode #100) said that 67% of entrepreneurs start a business in the field they were in. Consider your current job then, a paid internship for your next thing. (If you really want to dive deep into this idea, do so here). Alex Blumberg (episode #70) told James that he started Gimlet Media because he’s one of the very few people with that set of skills, skills he built up from doing basic NPR reports. 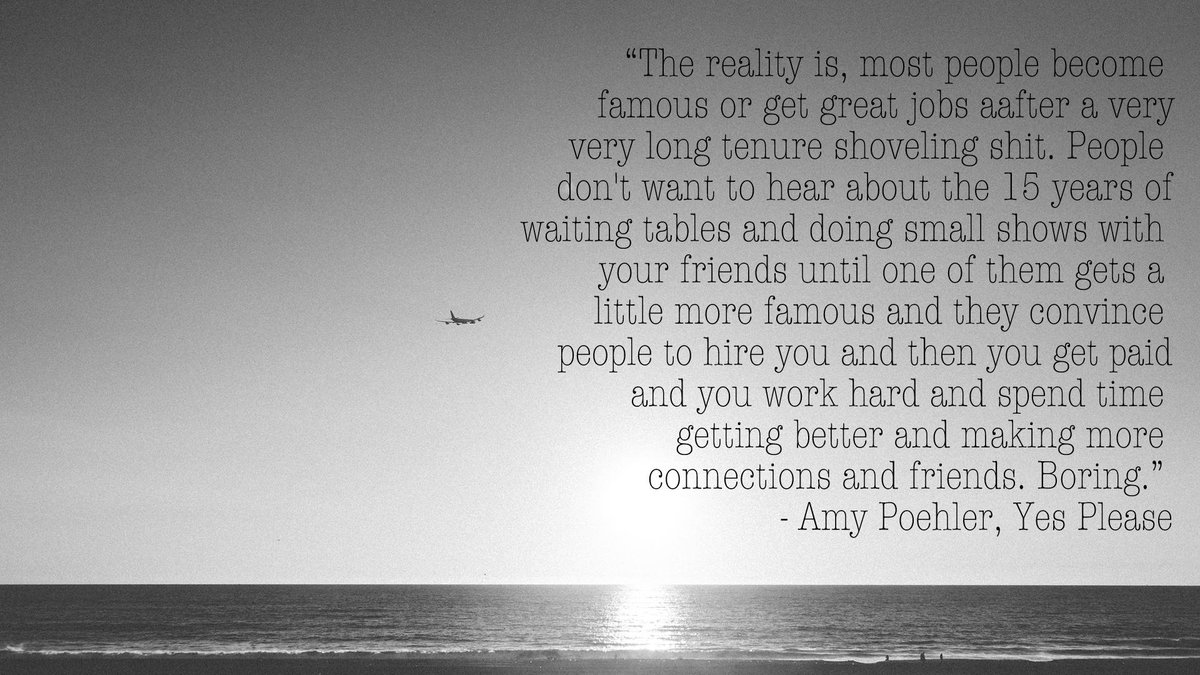 Norton has frequently worked with Louie CK and James asks why Norton can’t put out his own comedy show like Louis (or Aziz or Gaffigan) did and Norton says that he’s “realistic about my fan base.” It’s not that they are small, but he hasn’t hit the threshold yet for that level of success.

Norton also notes that he can’t do what Louis CK does on his show because he doesn’t have those skills. “He can do all the jobs on a set,” Norton says about Louie, “you have to have a certain amount of skills to do all that.”

James asks how someone can connect with the people they are speaking to, and Norton gives two bits of advice. Act confident and be honest. He says that people want to see that you are confident even though you might not be. Remember, they don’t know what is supposed to happen, they only see what is happening. If you make a mistake, they’ll only know if you admit you made one. About being honest, Norton says that people want to see that you are human, but only in certain areas. For example, he can be honest about how the lights or sound is off while performing, but not about how his act isn’t so great on a certain night.

Even if you are confident and honest, you’re still going to be nervous. “If you’re not feeling anything before you go on, there’s something wrong with you.” Norton tells James.

The interview ends when Norton says, “doing stand-up is something I will always have.” Norton has keyed in on the choose yourself ethos and the idea that he doesn’t need HBO, SiriusXM, or Hollywood. Sure, it’s nice to have those things, but he could get by without them. Stand-up is antifragile because of its natural ebbs and flows. Nassim Taleb writes

“Thanks to variability, these artisanal careers harbor a bit of antifragility: small variations make them adapt and change continuously by learning from the environment and being, sort of, continuously under pressure to be fit. Remember that stressors are information; these careers face a continuous supply of these stressors that make them adjust opportunistically.”

Norton could be a TV actor. Playing role after role on Law and Order or some such show. In many ways that career as a performer is similar, but they are different in one very important way, their fragility. Norton can continue to tour as long as he likes, where as the Law and Order character actor version of himself can’t.

For more Norton, see his list of books and movies on Amazon

Thanks for reading. If I vandalized an idea, vetoed too much of the conversation, or vagabonded mentally, let me know. @mikedariano

The 21 Days to a Strong Idea Muscle summary is newly updated. It’s available as a pay what you want download and you get a pdf summary along with daily prompts. It’s only for people who will hand-write a daily idea list and who are open to learning about the habitual, psychological, and cognitive aspects of the value of idea lists.