Case studies are a lot of fun and teach us how businesses or start-ups run (or run out of money). But we should be careful of the narrative merry-go-round. Sam Hinkie and Paul Graham both warn about the mistakes we make with narratives:

The reason I can't stand watching presentations or listening to pitches is that they give sequential rather than random access.

Bill Belichick said he prefers when people go off and work things out on their own and then come back together for this very reason. You don’t want someone going on, creating a good story, and then people following along like it’s summer camp.

With that warning, what you are about to read is a story.

Danny Meyer is a restauranteur, CEO of Union Square Hospitality Group, and author of Setting the Table, our source for quotes. This book was a delightful surprise because I knew nothing about Meyer and learned so much from him. This book matched my reading goals (#4).

Let’s start at the beginning, Meyer liked to eat. In the book, he proudly recalls winning a cookout competition at summer camp despite his cake sliding off a make-shift rack and into the ashes of the campfire. Growing up he worked in his father’s fledging hospitality businesses industry, mostly in European tours. Meyer’s father didn’t do well, but Danny learned a lot about international cooking, travel, and hospitality.

After finishing college and succeeding in the corporate world, Meyer took a 90% pay cut to return to restaurants from sales. He had to. “A career in the restaurant business was going to tap me on the shoulder even if I hadn’t found it first,” Meyer wrote. Great successes require great work and you’re only going to do it if you like it.

Mohnish Pabrai put it this way, what would you do instead of watching a movie? Charlie Munger said to find something that interests you because “I don’t think you’re going to succeed if what you’re doing all day doesn’t interest you.” In a Reddit AMA Tyler Cowen said that his success if from being born in a way that matches his career and persisting: 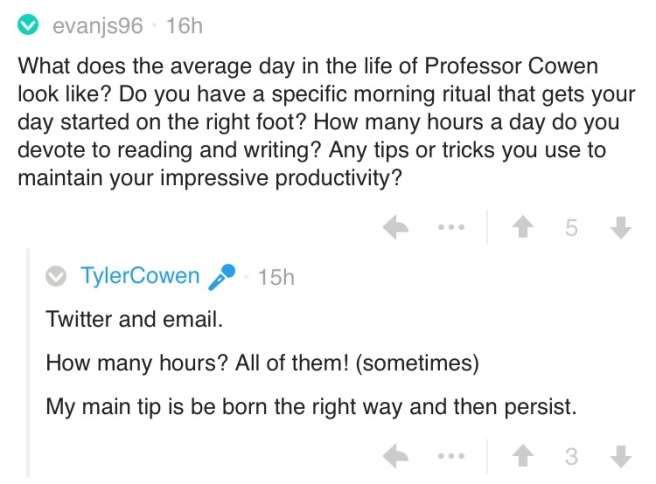 Meyer studied cooking. He filled his knowledge gaps. “I couldn’t take in the information quickly enough,” he wrote about a wine curriculum. After a short training in formal cooking, he got a job doing simple things. “I did those kitchen tasks no one else wanted to do and in which there was no fear that my rudimentary kitchen skills might lead to disaster.” The backwater is often a good place to start. Both Bethany McLean and Kara Swisher started their journalism careers in areas that didn’t get much attention.

During this time Meyer built up an ethos. “Hospitality exists when you believe the other person is on your side.”

He also learned about Incentives. During his years of giving tours in Italy, he wrote, “I could tell my travelers that I knew of an amazing family run place that very few tourists ever found. They loved that.” That is, Meyer found out about transaction utility, something  Richard Thaler explains.

Another incentive Meyer observed was during his time volunteering for the John Anderson presidential campaign. The volunteers he supervised showed Meyer how  “ideas and ideals were the only currency…(they) taught me to view all employees essentially as volunteers.” He learned that money is a proxy and if you can figure out the thing people really want, you can compensate them with that.

Meyer accumulated a helpful set of skills for someone who wants to be a restauranteur. He’s followed the suggestion to be there and created an understanding of what culture means, as well as the differences between French and Italian cooking. Meyer also developed a set of interpersonal skills he’ll need and knows just enough about cooking and restaurants to get started but not so much that he’ll copy what others are doing. 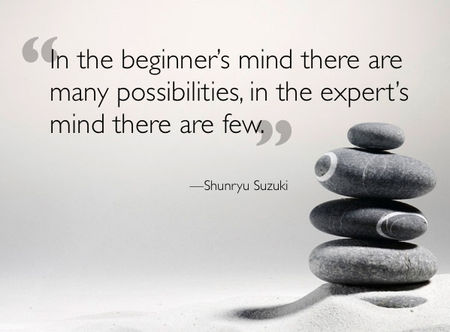 Meyer notes in the book that the conditions of the environment he wanted to enter were lucky. “I would also have the good fortune of entering the restaurant industry during its fertile period of revolutionary change.”

Conditions matters for business success. It’s the Iron Law of the Market. Milton Hershey shipped out his namesake chocolate on reconstruction railroads and built his national brand as national brands were possible. Hamburger joints like McDonald’s and In-N-Out used the growing car culture to create the drive-through hamburger experience. Even modern companies like Apple rise and fall on the conditions of the environment. Apple needed the mp3 which has its own story in How Music Got Free.

In the conditions and environment of New York City in 1985, Danny Meyer opens Union Square Cafe.

To succeed, Meyer has to be different.  He wanted to “combine the best of what I’ve found with something unexpected.” He compared it to music, “the trick is to put those notes together in a way not heard before.”

He also needed space. Meyer needed a location where there wasn’t a lot of competition and with low rents but also someplace people would actually go. He found a place with low enough rent. Ian Cassel suggested something Meyer would agree with; keep your fixed costs low and your variable costs variable.

A low overhead is a strong suggestion from many founders who make it. Jim Koch never rented an office, preferring instead payphones. Michael Ovitz had an office but used gifted office supplies and his wife answered the phones. Instagram had a low overhead too. One founder said about their first outside investment:

“That’s more money (the first $50K invested) than I had ever heard of in my entire life of a business getting… so here are two guys with a prototype, a couple of computers, and no office, who raised a half a million dollars who are looking at each other like, we think we can make this last. We were living on peanut butter and jelly sandwiches.”

Startups who fail to heed this advice fail. So too – almost – for Tony Hsieh who had to sell off nearly everything he owned to keep Zappos afloat.

Meyer kept his overhead low enough and got luck with his remodel, writing  “my naïveté went unpunished,” when it came to hiring a construction crew. The two-jar model notes that great success requires great luck and had this early break gone against Meyer it’s easy to imagine an alternate universe without Shake Shack.

As he put together the plans for Union Square Cafe, Meyer realized he couldn’t be the chef. He used his connections to find someone who could be. Meyer instead worked out front and thought through larger problems. There were many, but Meyer took a certain approach to them, writing,  “It was oddly exciting to manufacture challenges and surmount them.” This kind of mindset turns problems into puzzles.

Meyer enhanced his understanding of incentives. If a guest wanted a table at 8:00 but none were available, Meyer would counter with an offer to eat at 8:45 “which I knew sounded a little earlier than ‘quarter of nine.’”  Union Square Cafe also had a “medicine cabinet” for guests who didn’t have their expectations exceeded. Free glasses of dessert wine would be offered to patrons. This was cheap(ish) to provide but valuable for the guests. Dessert wines were a European thing and that added to the experience of a free glass (more transaction utility).

Meyer’s deep understanding came from being at his restaurant every day. On his first night away Meyer to his wife to Lutece and the chef asked ‘Why the hell are you in my restaurant?’ Meyer finished his meal but didn’t take another day off for a long time.

As Union Square Cafe succeeded, Meyer dreamed about other restaurants. He compared the process to having kids; fun to conceive, but less fun to gestate. “There’s not a lot of sleep in the first six months and you feel as if you’re never going to get your head above water.”

Meyer’s family was about to grow.

One thing Meyer is very good at is tearing down Chesterton Fences. He asks, “Who ever wrote the rule?”

When it came to new ideas, Meyer sometimes looked online. Before he opened Tabla (Indian food), he wondered about the competition. The best Zagat score in 1997 was 24/30.  Charley Ellis would nod in approval. It’s easier, Ellis said, to win if your competition isn’t very good. That said, Meyer still had to offer something different and better. Chef Floyd Cardoz, wrote Meyer, “continually seeks sensible ways to innovate in the Indian idiom, demonstrating that you can experiment while remaining grounded in solid traditions.”

As the restaurants grew in number Meyer felt what Brent Beshore‘s described as “progress anxiety.” You want to do something. Meyer used a checklist to help limit his actions to the best options.

This final point was most important early on. Meyer had to be in his restaurants to check on how things were going. In-N-Out founder Harry Synder did this too, living across from his first location and hopping off the couch to help if he saw the lines become too long.

During the growth phase, Meyer’s pregnant wife gives birth to premature twins that both die. They are devastated. Meyer writes that without therapy “the loss almost certainly would have brought us down individually and together.” Books like Meyers are great to learn from but we should remember that there are people with lives behind the companies.

It’s difficult to have full-time relationships with more than full-time careers. John Boyd, Bill Gates and Warren Buffett and Charlie Munger all committed to their careers to such a degree it left little time for family. Future founders would do well to remember that actions express priorities. As Stephanie Linnartz said, “My family is first, my job is second and that doesn’t leave a lot of room for hobbies and book clubs.”

During the expansion, Meyer hit on the 51% solution. “We can always train for technical prowess,” wrote Meyer. What he wanted is “the excellence reflex,” a response to act when something isn’t right. For Meyer, the Most Important Things were emotional skills like optimistic warmth, intelligence, work ethic, empathy, self-awareness, and integrity. If he found people that exemplified those he could teach them to run a restaurant.

Meyer successfully grew – and had growing pains. He recalls one meeting with a mentor where they talked about doing things the right way and creating good systems. The mentor motioned to the next table and asked where the salt shaker should be. Meyer got up, centered it, and sat back down. His mentor leaned over and moved and asked again, ‘where should the salt shaker be?’ Meyer moved it back. His mentor moved it again.

His mentor’s point was that the salt shaker would never be centered because people would always move it. It was up to Meyer to move it back each day. Ray Kroc put it this way:

“Business is not like painting a picture. You can’t put a final brushstroke on it and then hang it on the wall and admire it.”

Business, life, relationships, blogs, careers are Sisyphisian. This brings us back to where we started. If you don’t like rolling the same boulder up the same hill you need to find a new boulder or hill.

Thank you for reading. If you want to see all the books I read you can sign up here: http://eepurl.com/bgRZOX.