This post is available in podcast form. Search “Mike’s Notes” in your favorite player. The audio version includes Metallica, and audio of the block quotes below. It’s on Soundcloud too.

After Tren Griffin‘s post about The Success Equation I knew it was time to finally read Mauboussin’s work rather than hear him talking about it.

The book was great. It explained concepts just as clearly as he does in these interviews. The part of the book that had the biggest effect on me was the Two Jar Model. 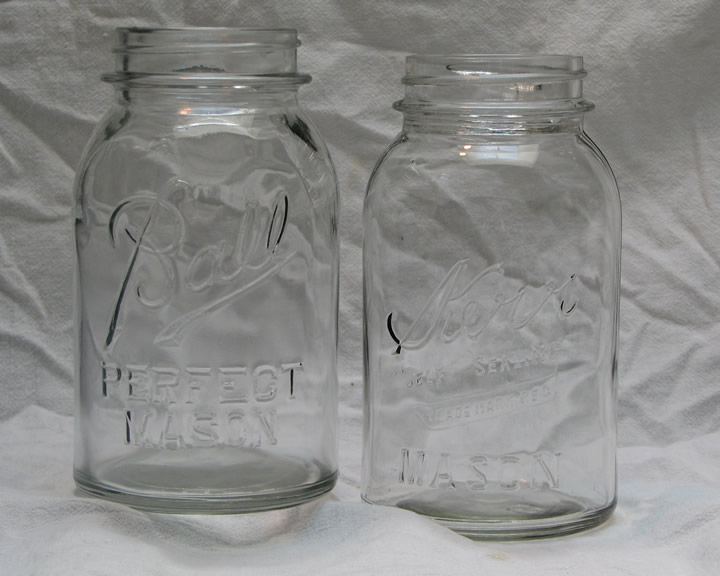 By FiveRings at English Wikipedia, CC BY 3.0, Link

That idea is that any outcome is a combination of “valuable” skill and  “boost/drag” of luck. In the book Mauboussin uses ample examples, so I will too.

On Sunday afternoons our YMCA has tennis lessons. I get the kids in the car, pull out the driveway, pull back in because we don’t have our rackets, leave again, drive to tennis, get out of the car, and get the kids in their groups. As I sit there waiting and reading, none other than Serena Williams shows up (she’s visiting family) looking for a volley partner. I volunteer, of course.

We warm up. Williams, impressed by my forehand, suggests we play a friendly game. I agree, of course. My serve.

My first toss is just right (skill +10, luck +2) and with a pedestrian pace the ball glides across the net, into the service box. Williams steps into a backhand (skill +70, luck +5) and smashes a winner down the line. As I retrieve the ball I wonder if Elon Musk has talked to Williams about certain aspects of escape velocity.

My next service toss is a little low and a wind gust pushes the ball a hair (skill +6, luck -2). This serve, a cumulative “4” does no better than the first. After hitting her winner Williams walks to the net and says something to the effect of “shoulder rehab” and “left handed.” The match continues.

In this parable, no cumulative score of my skill and luck is enough to win a point against Williams. Tennis is a game of skill.  Now imagine instead of playing Tennis I’m managing a soccer team. Soccer is more toward the luck end of the spectrum and if I were to go against the greatest manager in the world, the chance of me coaching to a victory is much better, though still not good.

Before dive deeper, let’s dismiss platitudes available on motivational posters. Mauboussin writes, “There is no way to improve your luck because anything you can do to improve a result can reasonably be considered a skill.” That is, you don’t make your luck.

When Bill Gurley became an analyst he was lucky because soon after he arrived, the people above him left, there’s nothing he could do to improve that result. Gurley got a vacated position because he was skilled enough to prepare for and apply for it.

Often it’s hard to identify where on the spectrum we are.  “Most of the successes and failures we see are a combination of skill and luck that can prove maddeningly difficult to tease part,” Mauboussin writes.

So what?  Depending on the location, processes differ.  For activities with more skill like surgery, games of checkers, tennis.

For activities with more luck, like roulette or the stock market.

Mix all these ingredients and you get a pair of suggestions for how to act in certain situations.

Process. Football, Mauboussin writes, has a luck factor somewhere between hockey and baseball. It’s about 48% luck. I’m unaware about how much Belichick knows this but he seems to understand it. His process towards luck is to focus on what his players are doing, not the score. Belichick looks at how his team is playing, even when they’re losing.  (4:30)

“I really felt good about the team, even though we’d gotten smashed. I felt something about the team that night in the second half that I really thought we could build on. Anyone that wanted to cash it in could have cashed it in. We weren’t going to win. We were behind, we were on the road, their crowd was in a frenzy. The Chiefs were playing very well but I could see the fight.”

Practice. In this clip, Belichick and his staff are explaining how they prepared for the play that would end the Seahawks season in Super Bowl 49. (35:00)

For the Patriots successful season there was both luck and skill. Belichick focused on the process parts where luck ruled the outcomes and was focused on the skill parts with specific practice.

Process. No one knows what will be a bestseller, not even Stephen King. He told Rolling stone his best book was, “Lisey’s Story. That one felt like an important book to me because it was about marriage, and I’d never written about that. I wanted to talk about two things: One is the secret world that people build inside a marriage, and the other was that even in that intimate world, there’s still things that we don’t know about each other.”

Writing a bestseller has a fair bit of luck so King trusts the process. He focuses on the things he can do. King jokes that he only takes off three days a year (Christmas, July 4th, his birthday) because it makes for good copy. He really doesn’t. “The truth is that when I’m writing, I write every day.” Stephen King doesn’t know if a book will be a bestseller, but he knows the kind of work that he needs to do.

Practice. When King was interviewed about learning the rules of grammar he said.

“When we name the parts, we take away the mystery and turn writing into a problem that can be solved. I used to tell them that if you could put together a model car or assemble a piece of furniture from directions, you could write a sentence. Reading is the key, though. A kid who grows up hearing “It don’t matter to me” can only learn doesn’t if he/she reads it over and over again.” That’s part of the skill of writing. Understanding the building blocks of language.”

There are things a writer can control. In all the interviews of Mauboussin I’ve never heard him mention his writing process (beyond a preference for physical over digital books) but he has something like King identifies. I have a hex wrench and Ikea bookshelf. Mauboussin is on This Old House.

I’ve written (long) notes about how Louis C.K. made Horace and Pete  and there were parts of that story that fit this process and practice view that the two jar model suggests.

Process. If Stephen King doesn’t know what makes a bestseller, that means nobody does, Louis included. King writes daily, uncovering the story like a fossil, and stays true to the characters (“no kid ever ran to his mother and said that his sister just defecated in the tub”) . Louis told Judd Apatow that he too has a process for making comedy. 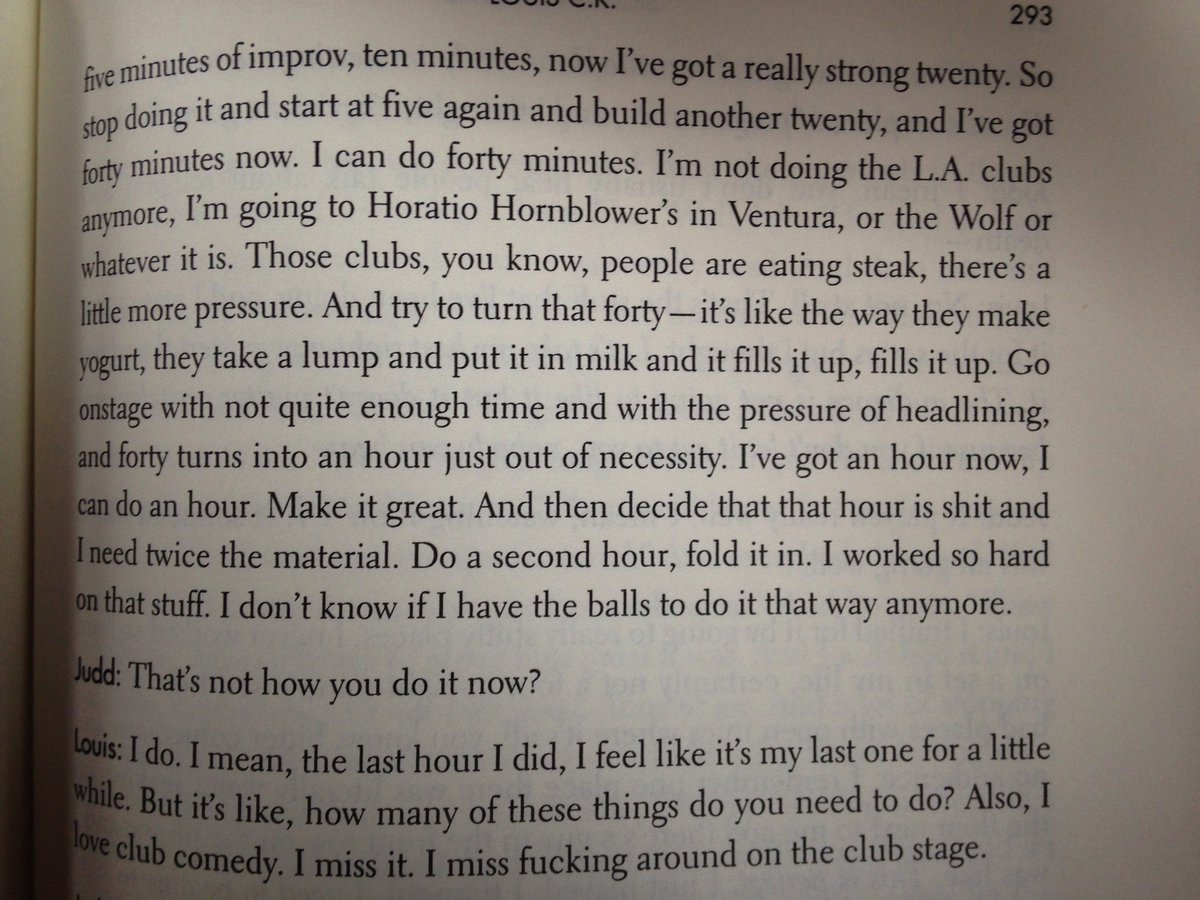 Start with five minutes, make it ten, stretch it to twenty, rinse, repeat. The outcome for “what’s funny” draws from the luck jar just as “football win” and “best selling book” draw from two jars as well. Each person though emphasizes the work that could lead to good results.

Practice. Here is part of an interview Louis gave with Charlie Rose when he was promoting Horace and Pete (lightly edited):

Charlie Rose: Here is what I hear. I mean, you know, write standup the best. Acting and getting — not only good reviews but also more and more roles. You’re now a director….You are now a producer…You manage this whole thing….I mean, do you come to some sense, I can pretty much do whatever I want?

Louis C.K.: Well, there are a million things I can’t do yet, but thank God, you know. You want to be able — you want to keep trying — you want to get — it’s like if you are in the army, a friend of mine was in the army back in the ’80s.

Louis C.K.: So, on his weekends, instead of sitting around playing ping pong, let’s go to jump school. And then they have a patch for jumping. And then they go hey, let’s go to medic school. So, they all got rated as medics. And they got this big bunch of patches all these things skills that he’s packing his head with. Unfortunately, then a war broke out and he was sent right to the front. Look at all these skills you have.

Charlie Rose: And we need you.

Louis C.K.: I like being patches, it’s like being a boy scout. And then all of a sudden you can do that. You know, like what’s the movie, “Matrix.”

Louis C.K.: When there is a helicopter and he says to her, you know how to play helicopter. And she goes wait a minute and she loads the program. Now I do. Well, anyone can do that. It just takes longer. You can just load a program. So, now I know how to create a multicamera drama and mount it the same week that I shot it. And how to direct many great actors which I had never done before.

Everything we do has some mix of skill and luck. Any little thing you can do is skill, and you should use deep work to get better at that. Any thing you can’t control is luck, and you’ll be well served to focus on good process rather than outcomes. Any outsized returns are a combination.

“Yep, the Warriors got lucky. They suffered no major injuries, beat teams that did, and got through the West without facing the Clippers or Spurs.

ps. If you want more, I wrote a book about Bill Belichick’s Red Teaming. It’s a mix of process and practice.

29 thoughts on “The Two-Jar Model”