Christian Rudder joined Patrick O’Shaughnessy on the Invest Like the Best podcast to talk about data, luck, and what people really want on dating sites.

A chunk of the interview is about Rudder’s book  Dataclysm which I had forgotten all about. A shame because I remember enjoying it, understandable because that was two years ago. Here’s one of my many highlights:

Okay, that suggestion out-of-the-way, let’s get to the podcast notes.

1/ Luck. “I think there is a lot of luck involved. We talk about it all the time, we’re smart guys, we worked hard. Things could have gone sideways very easily. I wish more entrepreneurs recognize the amount of luck that has gone into their success because there is a tremendous amount.”

The best understanding for the role of luck comes from Michael Mauboussin‘s Two-Jar model. Everything we do is an outcome luck mixed with skill.

Sometimes you’ll build up a good skill “draw.” Rudder is smart. He works with smart people. The niches of online dating was well-timed. Ditto for his previous work at The Spark. These sorts of things we can control, and increase our skill draw value.

Sometimes you’ll “draw” good luck, sometimes not.  How much online dating grew was luck. How fast college campuses installed high-speed internet in the late 90’s was luck. Rudder seems to understand this balance.

It seems like an admission of luck is part of sustainable success. Instagram‘s success was half luck. Soccer (Anson Dorrance) is half luck. Football (Bill Belichick, Pete Carroll) is half luck.

We see sustained success from people who admit to the roll of luck because that allows them to make better decisions in that environment. It’s like saying, it looks like rain, I should take an umbrella compared to it looks like rain, but I won’t get wet. Activities with more luck, writes Mauboussin in The Success Equation requires a different approach.

2/ MITs. “It occurred to us very early on that those are crappy metrics (ex: pageviews) for a dating site. What does it say about a dating site if someone is coming day after day after day for two years. That looks great for Twitter, but that’s horrible for us.”

When Donald Keough was with Coca-Cola (but not yet president) he recalls a meeting between Robert Woodruff and a group of lawyers. The conversation was around some legal advice Woodruff needed to know. At one point in the meeting Woodruff turned to a lawyer that hadn’t spoken and asked, “what do you do?” The lawyer, without missing a beat, said “Mr. Woodruff, I sell Coca-Cola.”

Rudder points out that it’s easy to get caught up in the MIT of other people. That’s the finish line fallacy. The Outsiders all keep their own MITs. Startups that failed look at the wrong MITs. Jason Fried suggests you keep your MITs rather than Jeff Bezos’s:

“His success (Bezos) is one that’s very very hard to achieve…most likely you won’t get there…the odds are stacked against you…and if you think that’s the only way you’re going to be miserable.”

If OkCupid chased the MIT of page views that would have been fine for their advertising network, but horrible for users.

3/ Learning from the real world. “The skills that have been most important to me in what I’ve done has been a kind of world real experience, a sense of how people work. I haven’t spent my entire life in an academic department. I’ve done a lot of different things. I think that is extremely helpful in analyzing data. Any data analysis in a social setting your goal is to understand human behavior.”

Rudder adds to the idea that a multidisciplinary approach works well. In Investing, The Last Liberal Art, Robert Hagstrom writes:

This broad-based approach is the heart of the New Investing. It is no longer enough just to acquire and master the basics in accounting, economics, and finance. To generate above-average returns, I believe, requires much more. The New Investing theorized by Charlie Munger and practiced by Bill Miller starts with the basics and then extends outward in all directions, toward any and all disciplines.

Rudder adds that we shouldn’t make things too complicated.  “A lot of the statistics and data analysis is not rocket sciences. In fact, the more rocket science-y it gets, that implies the worse your data actually is.” Instead, “You have to be able to make intelligent guesses about what people want.”

My guess is that Rudder (and co-founders) figured out OkCupid by trial and error. The better trials, the better errors. A descent scope of knowledge (the fox knows many things) helps figure this out.

Life is improvisation. A figure things out as you go approach. If you can understand a few key theories (“A few really big ideas carry most of the freight,” says Charlie Munger ) you’ll run shorter and more accurate trials.

A quick story of my own. When I supervised college seniors during their year of student teaching there were two ways students under achieved; lack of preparation and excessive paperwork preparation. The former group liked to “wing it” and “figure things out as they went.” These students always had below average scores because they weren’t prepared enough. They were foxes but in the wrong environment.

The second group focused on the paperwork component (and there was an obnoxious amount of paperwork) to the neglect of classroom flexibility. Their plans were too rigid and once the train was derailed there was no getting it back on.

The best students were in the middle of these poles. Jocko Willink says “discipline equals freedom” and that applied in these classrooms. The best students understood their key ideas deeply enough (lessons plans, preparation paperwork) but didn’t obsess over them. These sweet spots were  – I think –  Rudder’s experience too.

4/ Twitter. “In online dating the people have to talk to each other, unlike Facebook or Twitter where you can just talk to your friends who are like you. The people are all strangers and there is no pre-existing network laid over this whole thing.”

There are ways to use Twitter well; bust your biases, find information, collaboration, and connection. Rudder’s comments echo what Tom Brokaw said about television. Brokaw recalled the White House environment at Nixon’s resignation as lighthearted.  When he talked to his producer and saw the video the mood was quite different. “It always was for me an instructive lesson about the difference between television reality and real reality,” Brokaw said.

It pays to be different, especially when it comes to The Selfish Gene/sex.

Right now I’m reading The Beak of the Finch a wonderful book about Darwin’s finches and evolution. One (of many) parts of the book that struck me was the difference in natural selection and reproductive selection.

In Pre-Suasion Robert Cialdini writes about this application to the world of advertising (p74). 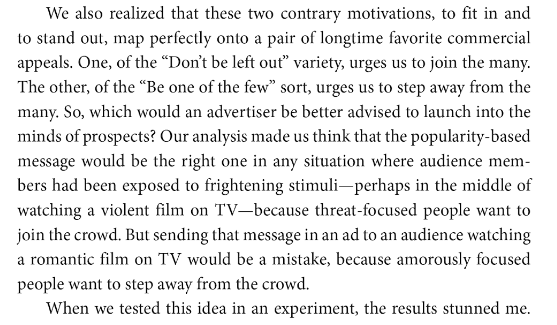 On the Galapagos Islands, Darwin’s finches want to be attractive enough to stand out (beak depth, size) but not so much so that owls eat them. Our own dating preferences seem to mimic this, only we don’t need to worry about the predators and can spread our plumage.

6/ Life would be so easy if it weren’t for people. “You have to grapple with the human psyche so the site will function. Obviously these twenty year old women don’t want to hear from these forty-five year old guys and we have to make everyone happy running OkCupid.”

In any of our endeavors it helps to remember we’re dealing with people. Don’t get sucked into strategy as a service (do hit refresh a few times). People do, want, and need things that numbers can’t predict. Rudder knew that 20-year-old women don’t want messages from 45-year-old guys, no matter how highly rated and motivated.

Numbers prove a computable measuring tool, but stories (psychology) matters too. Richard Thaler built his work around the shift from numbers to stories. Our brains evolved for stories.

7/ Business plans. “It was kind of a genius plan. The Spark had tons of time wasting stuff; things to read, dumb tests to take, and web toys that would appeal to high school and college kids. So they would pass these things around, waste their time, not study while they’re playing around on The Spark. And then, lo and behold, hey student who hasn’t studied! Check out our new product Sparknotes.”

I thought this was great and can only imagine the conversation that inspired it.

Person 1: How about we sell abbreviated notes for famous works of literature?

Person 1: Remember that idea I had? What if we provide both the time-wasting element and the notes in the same place?

[…] Patrick O’Shaughnessy gets this too, on recent podcast episodes he asks people like Christian Rudder about books that are under the […]

[…] online dating rather than dating […]