Tom Brokaw joined David Axelrod to talk about his life, so far. Growing up our family watched a lot of Brokaw and this interview was a nice summary of his life, many parts of which I didn’t know. Here are my notes.

1/ Be there at the right time. Brokaw said, “I got there (California) at the peak of the change.” Later the same thing happened when Brokaw  went to Washington D.C.

Brokaw was at the right place at the right time. He was in California to cover Reagan, he was in D.C. to cover Watergate, and he was the only American reporter in Berlin with satellite coverage when the Berlin Wall fell.

Bill Gurley had good timing when he was hired and quickly promoted because the people ahead of him left. Instagram was a block in the pyramid that could only be built on camera technology, 3G data speeds, and social networks. Karl Rove too was in the right place (Texas) at the right time (1980’s).

What’s of note is that none of these people controlled the where and when but each took action on the what. Gurley applied for the jobs, Instagram pivoted from check-ins to filtered photos, and Rove started a consulting business. Brokaw too took advantage, hustling his way up.

2/ Marriage (stakeholders). “She was breaking off our friendship because of my behavior and said, ‘No one can understand what you’re doing. You’re parents are terribly disappointed in you, for good reason. I’m just not interested in having a relationship with you anymore.”

Brokaw would marry that person and said, “it’s been 54 years of marriage at this point.”

Brokaw says Mary’s words were “a breakthrough.” Her stern lecture came as he was bumming around. Great stakeholders help us when we need it.

Spouses are special kinds of stakeholders. (VCs always compare marriage with investments, I’m not sure if this says more about investments or marriages). There are only a few people who dent the universe and a correspondingly few who will be married to them. Bill Belichick, Louis C.K., and the original universe denter – Steve Job, all separated from their spouses.

It’s hard to find the right person in life, especially for those with extreme drive.

That said, career success and marital success are not mutually exclusive. Brian Koppelman, Seth Godin, and Neville Isdell have all had great careers and marriages.

Whether it’s spouses, investors, or people you owe money to, anyone in your life can influence your life.

3/ Right conditions. “It was a town with a very high degree of intellectual accomplishment. In the three years that I was in that high school we had two people go to Harvard on full ride scholarships, one to West Point, two to the Air Force Academy – and these were just the guys. If the women had been in the pool we would have blown the lights out because they were the brightest people in town. There was a sense you could take on big challenges and accomplish them.”

Dan Coyle‘s work is the best I know on this idea of being around good people who can challenge you.

The key for an organization – town, school, business, club – is to create the right atmosphere and get the right people. Sometimes that means dealing with prophets of rage, writes Ben Horowitz:

If you’ve worked in a company for any length of time, you’ve probably seen one of these prophets. People refer to them as glass breakers, cowboys, toe stompers, or just plain assholes. Yet it’s difficult to get rid of them, because they produce massive amounts of high-quality work. Beyond that, they have indomitable will. No obstacle is too great, no task too large, no problem is too hard and they do not care who they offend, upset, undermine, or piss off to get the job done.

What you need to do with these people, writes Horowitz, is coach them well, give the right kind of feedback, and accept them. That is, create the right conditions for their and everyone else’s success.

Another way to build good condition is having books around. From Elizabeth Gilbert to the Wright brothers, people praise the availability of books.

Pete Carroll also praises the value of getting the right conditions, noting that people, “will function at a higher level. They’ll come in earlier. They’ll stay later. They’ll be more on it. They’ll inspire those around them. That’s the subtle way of improving an organization.”

4/ Deep understanding. “The radio station said, ‘we’d like to do this teenage disc jockey show, why don’t you come up here and try out?’ So, with my then girlfriend we ran that show and that led to a succession of jobs at that station in the summertime.”

5/ Models with headwinds/tailwinds. “I grew up in a household in white bread America in which the three biggest heroes were Jesse Owens, Jackie Robinson, and Joe Louis. Not because my dad was a sports fan, but because he knew what they had to do to get to where they were.”

Tim Ferriss likes to say he interviews people who succeeded despite their attributes. It’s those people that had to work extra hard to achieve something that can teach us best.

Ben Horowitz wrote that for certain jobs, people who succeeded with less ideal circumstances will be better employees.

… anybody with a pulse can sell a massively winning product like Google Ads or VMware hypervisors, but people who consistently sold Lanier copiers against Xerox were elite. In fact, it might be a good sign that a sales rep was successful at a bad company. To succeed at selling a losing product, you must develop seriously superior sales techniques. In addition, you have to be massively competitive and incredibly hungry to survive in that environment.

Investors with a modicum of humility point this out. Warren Buffett set out a yardstick to measure his success, and told his investors that if he didn’t produce greater returns to take their money elsewhere. Auren Hoffman said he had good investing returns thanks to timing as much as his choices.  Jack Schwager said “If you’ve done well in a bull market all you can assume is you’ve been long during a bull market.”

The athletes that Brokaw grew up with weren’t successful because they had tailwinds, rising tides, or a bull market. They succeeded without those things, and their success was special.

“There was this surreal atmosphere in the White House…at the back of the room there was a lot of staffers (one was teasing another about his haircut) and people were kind of hanging around. It was as if this was an enormous relief. Nixon comes out and makes his speech, goes out to the helicopter and raises his hands in defiance, with the victory sign, and lifts off. One of his counselors turned to me and said, ‘I’m going fishing.’

I go back to the office and David Brinkley says to me, ‘Did you think he was going to pull out a Derringer and shoot himself when he was up there?’ I said, ‘What are you talking about?’ I was in the room seeing everything. He said come down to the control room and take a look at the television picture.

On television isolation you penetrated Nixon’s psyche at that point. You didn’t see the staff wandering around, talking about what they were going to do. It always was for me an instructive lesson about the difference between television reality and real reality.”

I immediately thought of Twitter. There are ways to use Twitter well and one of those is to bust your biases and get a more accurate view of the world.

Everything we see is through a frame. Sometimes a change in our internal framing helps us solve problems.

Mellody Hobson reframed her company as private to think through decisions. Andy Grove did this too:

I looked out the window at the Ferris Wheel of the Great America amusement park revolving in the distance, then I turned back to Gordon and I asked, “If we got kicked out and the board brought in a new CEO, what do you think he would do?” Gordon answered without hesitation, “He would get us out of memories.” I stared at him, numb, then said, “Why shouldn’t you and I walk out the door, come back in, and do it ourselves?”

Maria Konnikova said “Mental framing is a very powerful thing…there’s always something you can do, you can always change the way you are thinking about something.”

Framing is so powerful, writes Robert Cialdini, because it can set the tone for how people will make decisions. The kind of music in the wine aisle influences what wines people buy. Reading words like “Florida, retiree, worried” primes people – we think – to walk slower.

One of my favorite recently discovered quotes is another form Horowitz. 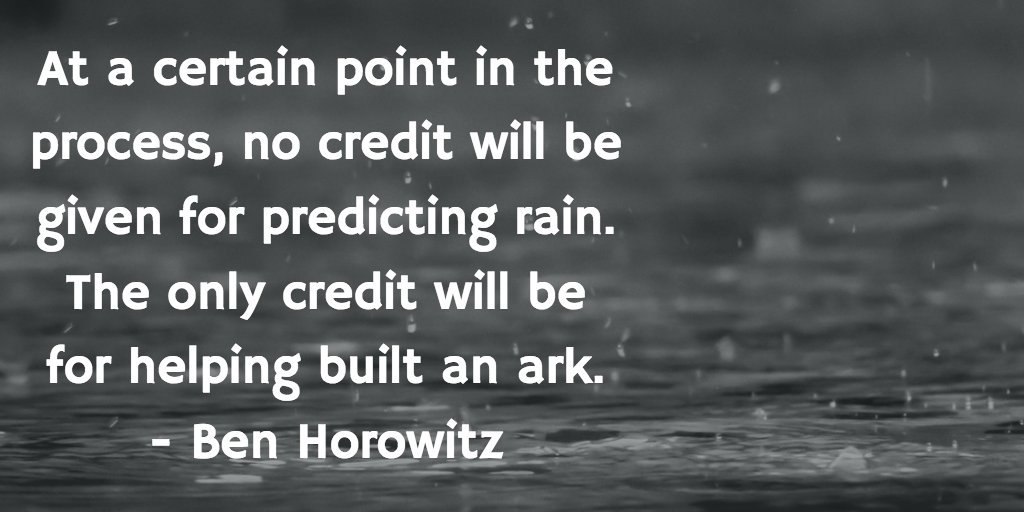 That means to build an environment where you acknowledge the framing, the priming, and the effects it has on you. Use Twitter well, understand television reality is different from real reality, and always [be curious](https://thewaiterspad.com/2016/04/06/brian-grazer/).