Seth Godin joined James Altucher to talk about how he got started telling stories, the power of placebos, and the only two things we should teach kids in school.

James begins the interview by talking about book sales with Godin, telling him that it took all of 1,800 copies to get on the New York Times list. Godin says that’s nice, but for him metrics don’t matter so much as the impact of his books. This is something he echoes in his second interview with James #86, telling him, “I want to be judged by what people who learned from me, teach other people.”

Metrics and media can be trick because they can be warped, like a funhouse mirror distorts what you look like, so too for the media. An early 2015 example was the shipyourenemiesglitter.com trend. Ryan Holiday (guest #18) interviewed the creator of the site, Mathew Carpenter to talk about how he worked his way up the media chain, leveraging lazy reporting at one level to get to lazier reporting on another. The full summary is available at the Observer but the lesson is that what you see isn’t always what there is. Godin’s origin and storytelling epiphany came from his time spent at Algonquin Park in Canada. There, he was the lowly canoe instructor among the cool sailing and windsurfing ones. Only seeing four people an hour, he realized that something had to change, he decided to try two things; put on a show, and let people grow.

Godin tells the story of Joanna Gerwin, a camper that resorted to hitting her fellow campers in the face at the first sign of frustration, but once she got in the canoe, once she learned not to fight with the wind, she changed. Godin taught her to “Breath and think and manipulate the tools at your disposal to make the thing you want to have happen happen.”

James attempts to summarize what Godin is saying and doing, wondering if “to really attract people we have to build a stronger story.”

To which Godin replies, yes, almost:

The story is never about the teller. The story is always about the person hearing the story, and that is where selfish marketers always fail. (Click to Tweet)

Godin says that in both Lance Armstrong and Oprah Winfrey we share some part of their and in following them we were following parts of ourselves. Oprah’s appeal isn’t that she’s so wealthy, it’s that she still struggles with her weight, relationships, and other things and so do we. You read these posts and listen to the podcast because in the best summaries, and in the best episodes, you hear something about yourself and want to learn more.

James tells Godin that Purple Cow and Free Prize Inside were “the most important books you’ve written.” At the time James was running an internet company and he needed to find an alternative to traditional advertising. One of the things Godin taught James was to find something cheap, easy, or unique to give to your customers rather than advertising. Old media advertising is dead (at least in its effectiveness). Godin says that recent brands like Lululemon, Chibani, and Beats have all succeed without relying on the “TV industrial complex.”

Let’s test this. What was the number one commercial from the 2014 Super Bowl? The most watched TV event of the year, not that long ago, and you can’t remember the most popular one? I couldn’t remember any. Here’s 10.

Godin noticed that the way advertisers could command the attention of their audience was changing. He built some products for Prodigy, a precursor and access point to the World Wide Web. It was a rival to AOL. There Godin saw that it was expensive to serve up ads and get people to be online. In those early stages were three lessons:

Godin eventually sold his company to Yahoo! in 1998 and became vice president of direct marking for a little over a year. In hindsight he tells James that it seemed odd companies could be valued for so much money, but be making so little. The climax came on March 10, 2000 when the NASDAQ peaked before cycling down.

Selling his company to Yahoo! may seem like a stroke of dumb luck, and Godin admits that it was but also says that “getting up to bat” mattered too. He failed many times before and many times after the sale and only hit a homerun because he struck out so often.

Another interesting nugget from this part of the interview was Godin’s comment about how much of “ones identity as an entrepreneur is really tied up in what you do all day. And that identity was stripped.” This happens to many people, from astronauts to retirees. It’s why Scott Adams advocates for system rather than goal thinking:

To put it bluntly, goals are for losers. That’s literally true most of the time. For example, if your goal is to lose ten pounds, you will spend every moment until you reach the goal— if you reach it at all— feeling as if you were short of your goal.

Yeah, but what happens when we reach our goal, we’re all winners right?

If you achieve your goal, you celebrate and feel terrific, but only until you realize you just lost the thing that gave you purpose and direction. Your options are to feel empty and useless, perhaps enjoying the spoils of your success until they bore you, or set new goals and reenter the cycle of permanent presuccess failure.

One of Godin’s systems is to think in terms of stories, and one character is a placebo. Godin and James talk about placebos, which Godin says can “create an environment to make people better.” Godin tells James that an ethical placebo is one where the customer won’t feel violated when they find out that there was a placebo effect. Consider the cookie.

Look at the oatmeal raisin cookie. It looks fine, we wouldn’t eat that cookie because someone has taken a nice bit out of it, but the cookie looks acceptable enough to eat otherwise. Contrast that with the cookie below. 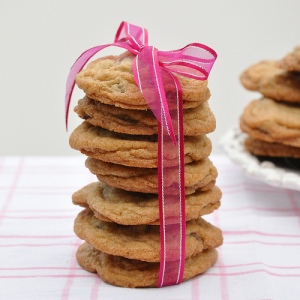 In his book, Mindless Eating, Dr. Brian Wansink wondered if we valued this second batch of cookies more, so he did an experiment and found that people will pay 3X as much for a brownie served on glass china compared to one served on a paper napkin.

Godin says that if we were all “MIT graduates” maybe stories wouldn’t have this same effect on us.

Toward the end of the interview Godin tells James, “the only two things we should teach kids in school is how to lead and how to solve interesting problems.” This mimics his TEDx Talk and ebook, Stop Stealing Dreams.

The interview ends with James asking about Squidoo, which Godin says they are still experimenting with. As of August 15, 2014, it was acquired by HubPages.

Please let me know about any typos or weak points on Twitter @MikeDariano or (559) 464-5393. If you want more from me, subscribe to my newsletter.