Andy Grove’s book Only the Paranoid Survive is great. It’s a book that explains one thing from a person who did it.

Grove’s thesis is that strategic inflection points (SIPs) are “full scale-changes in the way business is conducted, so that simply adopting new technology or fighting the competition as you used to may be insufficient.”

These points rarely “come in with a bang,” but instead “approach on little cat feet.” “You may have a hard time even putting a finger on what has changed, yet you know that something has.”

Grove’s book is full of ideas and explanations about SIPs and he points out time and again the fractal nature of them. SIPs happen at all levels, it just depends on your point-of-view. “Your career is literally your business,” Grove wrote, “You own it as a sole proprietor. You have one employee: yourself.”

We’ll touch on four things that apply to the businesses of people and to the people of businesses.

Before we start, a podcast version of this episode is/will be available here: https://soundcloud.com/mikesnotes, https://overcast.fm/itunes1055386383/mikes-notes, https://itunes.apple.com/us/podcast/mikes-notes/id1055386383

1/ Be there. Being there is all about having the right information, not filtered information. Grove wrote, “Our IT manager said, ‘Well, that guy is always the last to know.’ He, like most CEOs, is in the center of a fortified palace, and news from the outside has to percolate through layers of people from the periphery where the action is.”

Each layer between the c-suite and the customer is a layer where filters naturally happen. As Tren Griffin wrote, “as a manger you can’t review everything.” The fact that you have middle managers is precisely because they have a certain skill at filtering. Unless they filter the wrong stuff. How do you get around that?

You have to spend more time with people who spend their time ‘outdoors,’ wrote Grove, “where the winds of the real world blow in their faces.”

We saw this with Neville Isdell. He wrote about route riding in all black townships in South Africa “observing what was happening in the marketplace while he (a salesman) went about his normal sales job.”

Wherever Isdell went for Coca-Cola he visited bottlers. He visited plants in East Germany and traveled through Checkpoint Charlie. He drove around the Philippines. He visited all kinds of places in Australia.

We saw this with Samuel Zemurray, who worked in the banana fields. 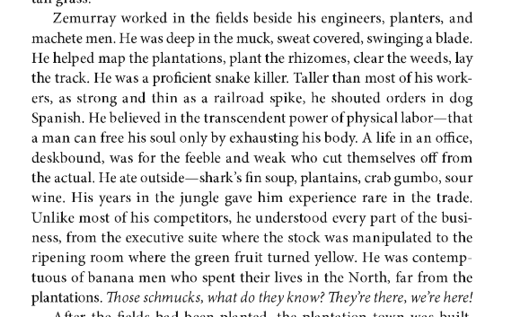 Wesley Gray saw this when he was in Iraq. The things he had learned (from the c-suite) were not what he saw on the ground.

Startups failed because they weren’t there.

But, the doesn’t mean they’re right. “I feel much safer back here in California than he does in ‘enemy territory,’” Grove observed, “But is my perspective the right one? Or is his?”

The goal is to see which way the wind is blowing, it’s to hear if people say, “people don’t just…” and ask them follow up questions. It’s getting your hands dirty, and when you wash them to question the work being done.

2/ Appoint a devil’s advocate. “We developed a style of ferociously arguing with one another while remaining friends (we call this “constructive confrontation”).

Intel mastered the art of argument. You have to. SIPs sneak up on you. Hence the subtitle of the book, “Only the Paranoid Survive.”

Not every middle manager or plant manager is going to be right. They can’t be. Instead you need people who will argue a position to its finest point. “The most important tool in identifying a particular development as a strategic inflection point is a broad and intensive debate,” wrote Grove.

Other successful organizations suggest a Devil’s advocate. Ben Horowitz, a disciple of Grove, instilled it at his venture capital firm a16z. He did such a good job this is how his cofounder,  Marc Andreessen put it:

“It’s the responsibility of everybody else in the room to stress test the thinking. If necessary we’ll create a red team. We’ll formally create the countervailing force and designated some set of people to counter argue the other side.”

“Whenever he (Ben Horowitz) brings in a deal, I’ll trash the shit out of it,” Andreessen bragged like a brother.

Andreessen takes the other side because you need people of authority and power on both sides. UNC soccer coach Anson Dorrance has Bill Palladino. “No one else is going to say ‘no’ to Anson.” Palladino said. Bob Seawright said that the other side needs to be “empowered” or you won’t really get good pushback.

Why do you need one? Because you’re old, man. Grove wrote that his experiences (and success) happened in the past twenty years. If things are about to change, then he’s probably not prepared for it at all. A devil’s advocate helps you see that.

3/ Decentralized command. Something in this book that’s not in a lot of other is an admittance of non-brilliance. Phil Knight did this well in his book Shoe Dog and Grove does it too.

When he writes about profiting from a SIP, Grove notes that it’s the front line people that made a lot of decisions about what to do.

“It (production numbers) got there by the autonomous actions of the finance and production planning people, who sat around painstakingly allocating wafer production capacity month by month.” When these middle managers looked at what was profitable, they made the choices that helped lead the company out of a SIP. “The process of adapting to change starts with employees who, through their daily work, adjust to the new outside forces.”

You have to trust your people for this to work. Skunk Works did. Nike did, “I let them be” wrote Knight. Navy Seals did, it’s a favorite topic of Jocko Willink. Louis C.K. did, and Horace and Pete was better because of it.

How do you use decentralized command?

Kids love to explore the world but don’t (always) know not to get in stranger’s cars, stick things in outlets, or click on certain internet links. Parents eventually let them spread their wings, but create a net of sorts for them to fall into. Good managers do this too.

Anson Dorrance tries to create artificial chaos so his team is prepared. That means running late to get to games, long road trips, and intense drills at practice. Then, when stressful situations arise, the players are somewhat prepared. Ditto for their play on the field. Dorrance prepares them and then lets them play. Grove suggests this too:

“Resolution of strategic dissonance (that is, not knowing what direction to go as a company) does not come in the form of a figurative light bulb going on. It comes through experimentation. Loosen up the level of control that your organization normally is accustomed to. Let people try different techniques…Management has to become more tolerant of the new and the different.”

Individual strengths are an advantage, especially as companies move from being vertically structured, (the whole hog) to horizontally structured (selling bacon or chops).  Mark Zuckerberg coded the first Facebook, but as the company has grown he’s done less. Mark Cuban started off installing routers, now he has a specialist take care of the technology. Walt Disney did almost everything on the first Mickey Mouse, but delegated to others later on.

4/ It’s emotional. I was surprised by the amount of emotion in Grove’s book. SIPs are hard and take a toll on everyone involved. “It’s very personal…I learned how small and helpless you feel…Confusion engulfs you…I felt the frustration that comes when the things that worked for you in the past no longer do any good.”

That’s just from one page.

Sophia Amoruso said, “sometimes you just kind of explode and hopefully no one else is around.” In my research on failed startups, the emotional weight was harder than anyone realized.

Grove wrote, “businesspeople have emotions, and a lot of their emotions are tied up in the identity and well-being of their business…In many instances, your personal identity is inseparable from your lifework.”

Early Warren Buffett understood this. In his letters to shareholders he tried to head off their emotional trains. “It is most important to me that you fully understand my reasoning in this regard and agree with me not only in your cerebral regions, but also down in the pit of your stomach.” Buffett needed them to know that when things got rocky, when they felt a swell of emotions, that they understood his system.

Teddy Roosevelt said he saw men crying when they weren’t selected to go with him to fight in Cuba. The Chicago ‘Black’ Soxs players were upset when they couldn’t play baseball. “The center of their lives was talent on spiked shoes. Without the demonstration of this, they were nothing.”

We are more than our jobs, but that realization carries more emotional freight than most people expect.