Charlan Nemeth’s conversation with Russ Roberts has, like a sledgehammer, both broken and reinforced an idea we cling to and trust; good arguments.

Andy Grove wrote, “we developed a style of ferociously arguing with one another while remaining friends (we call this “constructive confrontation”).”

Michael Holley wrote about Bill Belichick, “You actually got credit when you logically disagreed with him.”

Chris Cole said that he asks his staff why he’s wrong, “This is an existential question if you’re a long volatility manager.” 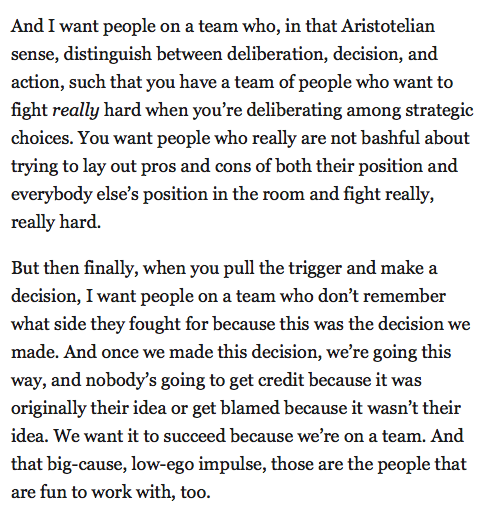 In her podcast with Roberts, Nemeth notes we’ve got some of this stuff wrong. For starters, disagreements in groups is good but difficult. The power of the majority and going along to get along is “Probably the most powerful phenomenon in social psychology.”

What it comes down to, Nemeth explains, is the assumption that truth lies in numbers. Sometimes it is, and sometimes it ain’t. Crowds are wise when judgments are independent and participants are knowledgeable. Anyone can guess an Ox’s weight:

“Majorities can be correct but aren’t necessarily correct,” Nemeth says, “The real concern is that when they’re wrong we still follow them.”

That’s the basis for good arguments. However, good isn’t easy.

Culture is like a greenhouse. In some places, some things, like dissent, thrive. One Patriot’s scout said that if he graded a player highly, but that player failed on another team, Belichick and (former GM) Scott Pioli wouldn’t hold it against him. Maybe he would have succeeded with the Patriots. Belichick and Pioli avoided Annie Duke‘s resulting trap.

Many cultures have anti-disruption norms. In college, I learned to pause in the middle of class – and not the end – to ask students if they had any questions. At the end of class, they hoped to escape early. Good culture is created from the top down, even if you’re just an adjunct instructor. Brent Beshore said good bosses shoulder the shit umbrella.

Nemeth notes that it is perfectly rational to not speak up, especially if you have less experience. Roberts said, “I think the lesson here for managers, families, and friends is to react graciously to negative comments or constructive criticism.”

An early mentor to Jim Chanos was Bob Holmes. Chanos had shorted a stock that doubled, “The New York partner was screaming for my head on a plate. I was all of twenty-five years old. But he stood behind me. He’d seen the work. He’d seen the documents. He’d said, ‘Kid, you’re right.'”

“There are costs to being a contrarian,” Nemeth said. She sometimes plants a confederate in her classroom. That person will take the other side of the issue. Once they do, “Everything zeroes in on them.” Once perfectly behaved college students will, “at first by innuendo and then more directly, suggest that the person is either stupid or immoral.”

When people repeatedly challenge us we get irritated. Nemeth uses 12 Angry Men in her classes.

In the podcast, Nemeth warns against superficial solutions. Having a red team or devil’s advocate is often just a name for a role. Bob Seawright agrees that a skepticism is “not the same thing as real disagreement.”

It’s better than nothing, but barely. “It’s an intellectual game…They’ve been teaching this (devil’s advocate) in business school and I never believed it.”

“To have an impact as a dissenter you have to be consistent over time. It isn’t a one-shot thing.”

The incentives are complicated too. “You can stand up and take the risk but you won’t benefit from it in the sense that people will think better of you.” Again, culture matters. Movies, like in 12 Angry Men, can suggest situations. Nemeth said, “That’s a dramatic vehicle but it parallels many studies.”

Two people that seem to have figured things out are Josh Wolfe and Marc Andreessen.

Wolfe said that in each fund, each person gets one wild hair investment. If someone pounds the table when no one else does, that’s good. Nemeth said that good dissent “has to do with authenticity and conviction.”

Andreessen said that he values being right as a group more than being right as an individual. His haggling with Horowitz is, as Nemeth said, built on an attitude of respect. “If you’re rude it’s much easier to dismiss you because it’s much easier to attribute it to your personality and ignore the position in which you have conviction. You can show conviction without yelling.”

Having the experience, culture, and teams like Wolfe and Andreessen take time and feedback. Here are three things to be more like those two.

1/ Change our point-of-view. “At some point, we lose the ability to have clarity about what we know.”

Whether it’s Munger’s quote about learning (or unlearning) or Has Rosling‘s attitude of factfullness, the world changes and so should we.

Or, the world is different than we saw it. “My final two years in the Marines flew by and were largely uneventful,” wrote J.D. Vance, “though two incidents stand out, each of which speaks to the way the Marine Corps changed my perspective.” Everyone lives in a bubble, the question is, how distorted is your view? 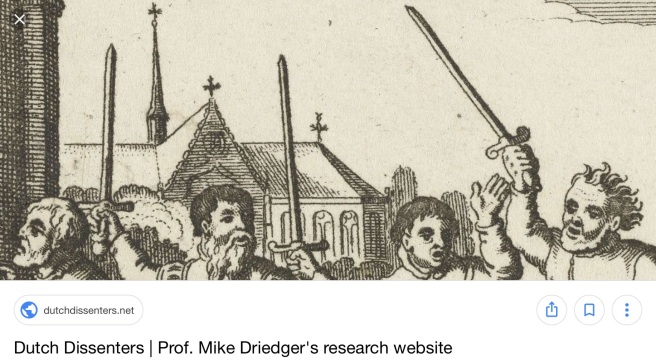 This is from a google search for “dissenters.” Words conjure images, Nemeth said, and with this kind of marketing, no one is buying.

Scott Adams wrote, “One of the easiest forms of persuasion involves associating one image or idea with another in a way that makes some of the goodness (or badness) of one rub off on the other.”

3/ Ask, Are you sure?  Roberts said, “With those three words; ‘Are you sure?’ It’s remarkable how fast people climb down from their overconfidence.”

Nemeth likes this idea, “Opening the lid just a little bit does make a difference…It’s not being disrespectful but it’s being clear.” Much like Five Whys, a few more questions can lead to better answers.

Good dissent and debate and discussion are worth working toward. Lite dissent is like cooking a grilled cheese sandwich. Sure, there are ingredients, heat, and a procedure, but it’s not really cooking.