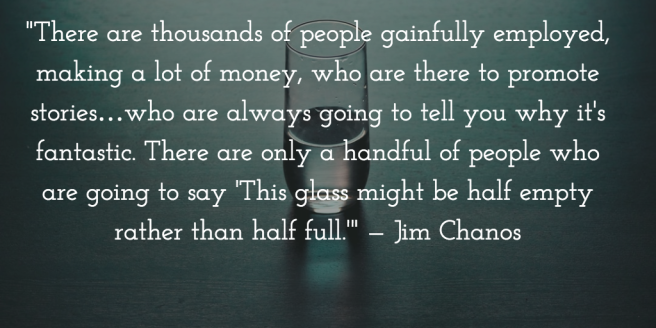 Chanos’s firm, Kynikos, is named after the Cynics of Ancient Greece. “They basically were searching for the ultimate truth.” Here is one, unique, Diogenes primer.

Decentralized Command. Early in Chanos’s career, he worked for Gilford Securities, a job with “the latitude to do whatever I wanted to do.” Later in the episode, Chanos said that one mentor was Bob Holmes:

Lowenstein describes Warren Buffett’s approach to decentralized command as “he picked the chorus line but didn’t attempt to dance.” Kirk Lacob of the Golden State Warriors put it this way; “I always thought our secret sauce was that we have great people and turn them loose and let them do what they’re best at.”

Of course, decentralized command only works with the right incentives. It’s the Upton Sinclair warning; don’t expect someone to understand something his job demands he not. Chanos said his first short report “wasn’t received very well as you can imagine, particularly because the big brokerage firms who recommended the stock were also making a fortune selling their annuities.”

Tesla, Chanos said; “is one of the bellwethers of this market. It is a hopes and dreams stock. Investors have pinned their hopes and dreams on this stock and on this CEO, who has done a very good job promoting that vision. The problem is that it is an automobile company.”

It sounds like his criticism of Musk is selling too much sizzle and not enough steak. Great leaders, said Josh Wolfe, “…need a marriage of both. You need a storyteller and you need an operator.”

The secret to great investing is having an edge.

“Julian Roberts had said it best, ‘What is your edge?’ When having a bear and a bull discuss a stock at his shop he would constantly say, ‘What do you know that the market doesn’t?’ What is in your process that gives you an edge, trading-wise or research-wise? What makes you see things differently? Where you see the reality rather than the perception of reality?”

Edges are tricky, performance figures are easy. But as Chris Douvos noted, performance is often a lagging indicator. It sounds like Chanos agrees, “What most people do is look at performance and that alone will not do it for you because you’re always going to chase that which is behind.”

Around 23:30 Ritholtz and Chanos discuss China. Here’s Josh Brown’s request for readings about the country. Beyond the books and the podcast, there’s this 99PI episode about duplitecture in China and also the ghost cities.

Early in his career, Chanos learned the value of arguing well. Another mentor was Julian Robertson, and “his approach galvanized me. He’d call me up and say, ‘I see you’re short XYZ Corp. Some guys in my shop like that. Why don’t you come over for lunch.’ It was always like going into the lion’s den.”

Reporters like to know the other side too. Ritholtz asked if that’s why Chanos had a pleasant relationship with the media. “Reporters generally like talking to short sellers because they’re going to get the opposing point of view on a situation.”

A recent addition to this point is what Bryan Caplan calls the Ideological Turing Test.

Books “I read a lot of history,” Chanos said.

“One of my favorite historians is William Manchester. Everyone remembers his MacArthur biography (American Caesar) and his unfinished Churchill Trilogy, but the book that’s a game changer is A World Lit Only by Fire. It’s the story of middle ages and reformation, written through this prism of great people like Magellan and Gutenberg.”

“In my history of fraud class, we love The Match King by Frank Partnoy…a wonderful story of the greatest fraudster of the 1920’s.”