Someone tweeted about the value rereading books. The books don’t change but the reader does. In that spirit, we’ve revisited Zero to One and today will revisit Moneyball.

Michael Lewis’s bestseller from 2003 is the quinceanera of sports analytics. Birthed by Bill James in his Baseball Abstract(s), sports analytics continues to grow, age, and mature. It was Lewis’s book that brought it mainstream and it’s from the book we’ll draw a few quotes. Ready?

1/ Measure the right thing.
“The scouts adored high school players…High school pitchers also had brand-new arms, and brand-new arms were able to generate the one asset scouts could measure: a fastball’s velocity. The most important quality in a pitcher was not his brute strength but his ability to deceive, and deception took many forms.”

As Sam Hinkie told Patrick O’Shaughnessy, for a long time, fastball velocity was a good metric. But now we have better ones.

2/ Watch your biases.
“There was, for starters, the tendency of everyone who actually played the game to generalize wildly from his own experience. People always thought their own experience was typical when it wasn’t. There was also a tendency to be overly influenced by a guy’s most recent performance: what he did last was not necessarily what he would do next.”

Like fastball velocity, our biases generally indicate the right direction but there are other tools besides what’s between our ears. This is arriving in Traffic. Good organizations have systems too,  like the The GMs.

3/ Zero fucks, enough ego.
“…if there was one thing Grady knew about Billy, it was that he could give a fuck about baseball tradition. All Billy cared about was winning.”

There’s a dichotomy of ego; gumption but not grandeur. Too much ego for Billy Beane would have been wanting to win my way.Gregg Popovich understands, “I don’t care where an idea comes from. You have to be comfortable enough in your own skin to realize that an idea can come from anywhere.”

4/ Put a Milo on him.
“‘Bad makeup’ is a death sentence. ‘Bad makeup’ means this kid’s got problems we can’t afford to solve. The phrase signified anything from jail time to drinking problems to severe personality disorders.”
“The meetings, from (Paul and Billy’s) perspective are all about minimizing risk. They can’t afford to have guys not work out.”

Warren Buffett says there are two rules to investing. Rule number one, don’t lose money. Rule number two, don’t forget rule number one. If half of success is showing up, then one-third is avoiding mistakes. 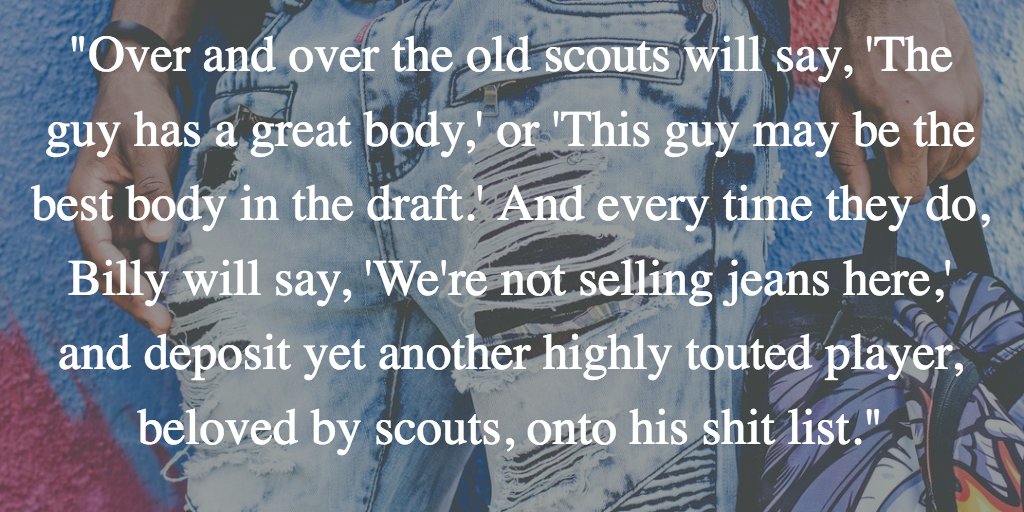 7/ Career capital.
“For instance, when baseball managers talked about scoring runs, they tended to focus on team batting average, but if you ran the analysis you could see that the number of runs a team scored bore little relation to that team’s batting average. It correlated much more exactly with a team’s on-base and slugging percentages. A lot of the offensive tactics that made baseball managers famous—the bunt, the steal, the hit and run—could be proven to have been, in most situations, either pointless or self-defeating. ‘I figured out that managers do all this shit because it is safe,’ said Alderson. ‘They don’t get criticized for it.'”

“I’ll give you an example, if you want a good recommendation for an Indian restaurant, you are far more likely to get a good recommendation from a scaffolder called Terry than from the editor from the Times literary Sunday edition. Because scaffolders are perfect recommenders. They have quite a bit of cash but they want good food. They’re not interested in showing off their sophistication. They want a pretty good meal for a reasonable money.”

8/ 75 copies.
“It didn’t occur to him (Bill James in 1977) to be disappointed by a sale of seventy-five copies; he was encouraged! No author has ever been so energized by so little.”

Jim Chanos told Barry Ritholtz that his first short suggestion “wasn’t received very well as you can imagine particularly because the big brokerage firms who recommended the stock were also making a fortune selling their annuities.”