Good decision making is hard. “You realize that you’re in the fishbowl not knowing there’s water,” said Morey, “Half the time with your decisions you don’t know if its cognitive bias, anchoring, or loss aversion. Even if you know its happening it still affects you in a big way.”

These biases can be as puny as presentation. Medical patients tend to prefer surgeries with 90% survival rates to 10% mortality rates. While pernicious, our evolutionary biases can be circumvented.

Good decision making requires humility. Sometimes bad reasons have good outcomes. Fortuna is blind so don’t look to her, but your model needs attention. The best models, said Hinkie, are interesting ones. Free throw shooting is boring. However, those better models are more subject to your views (and biases).

Beane said that he wouldn’t recommend a “scorched earth” policy of only data. Instead, incorporate the non-numerical data. How?

If it’s subjective, rank it. 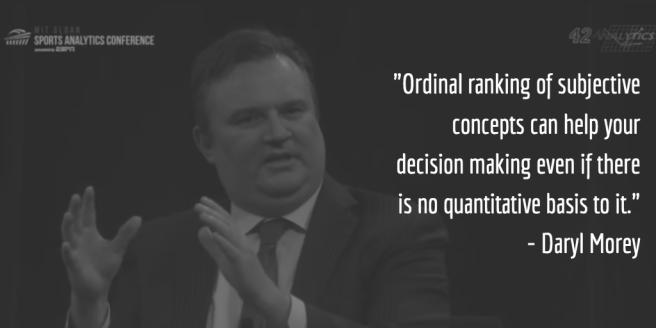 Hinkie said he learned from Morey to strip things down. “I’m asking ‘Why?’ a hundred times,” Hinkie explained.

Beaned added, “The idea that anyone can watch a seventeen-year-old for an hour and predict what’s going to happen in ten years is asking too much.” But, he added, you need on the ground intel. Sometimes a scout in Oklahoma can tell you things only a scout in Oklahoma knows.

Remember though, you aren’t doing this on your own. As Eliud Kipchoge said, “one-hundred percent of me is nothing compared to one-percent of my team.” Morey said much the same thing, “That’s why in hiring it’s very important. Passionate, well-informed, well-prepared people will advocate and you will only learn from the strong advocation of someone.” These GMs want people who argue well.

You also need to communicate with the people above and below you. Some ownerships are better said, Beane and Morey. All organizations have stakeholders and in sports, that group includes; players, owners, fans, journalists, and sponsors. Investors know that filtering in aligned limited partners helps them do more. GM of the Astros Jeff Luhnow said:

The Sloan Conference GMs are also a group who chose different tacks and tactics. Morey clarified that it’s not so much different as extreme. For example, if you want to score more points, shoot more three-point shots than two-point ones. If you want a great player you need a high draft pick, and the more high draft picks the better.

These leagues are good, said Hinkie, and you need to have an edge that you push. This could be scouting, player development, training, analytics, trades or whatever. The type of edge doesn’t matter so much as having one. Don’t be different for the sake of being different said, Zadia. Be different because you think you’re right.

But don’t get comfortable with your difference. In the early days of analytics, said Beane, it was like picking up a dollar off the sidewalk. Then it was like finding fifty cents. Now it’s spotting a quarter. Edges erode. “The game is so much smarter now,” said Beane, “There is no low hanging fruit at the executive level now.”

If you liked this post you may also like posts on Sam Hinkie, Daryl Morey 1, Daryl Morey 2, or Michael Lombardi.