Judith Elsea was on the Origins podcast from Notation Capital to talk about seed investments, VCs, and figuring out who to work with. Much like Gina Martin Adams I had never heard of Elsea, but thought her interview was good. Here are my notes.

1/ Heuristics (including ‘default to no’). “If it (the Weathervane algorithm) makes us look at something and say ‘that’s really interesting, we don’t have a lot of exposure to that or we really like this team, or that’s a great looking portfolio or we want to know more,’ then the qualitative stuff starts clicking in.”

Weathervane is an internal tool that Elsea and her team at Weathergate Capital use to evaluate what’s a good deal and what isn’t. When I heard the podcast, I thought, that sounds really cool and I’d like to see it.

The good thing though is that Weathervane is just a filter, and we can all create filters. One filter is the default “no” and Elsea has this one too. “There has to be a really good reason you’re adding a name,” to your portfolio Elsea says.

Mellody Hobson explained one of her managers has a “process of elimination, she assumes she doesn’t want to own anything, everything is a rejection.” Michael Lombardi said “Scouting’s not about finding players, scouting is about eliminating players.”  Lombardi’s former boss Bill Belichick sticks with his draft board rankings, a form of in-the-moment-“no.” Say “no” until you get to something that’s not a “no,” then, in Elsea’s words “the qualitative stuff starts clicking in.”

Seymour Schulich wrote, “The path to superior results is to accept only the best ideas.” Charlie Munger said “If something is too hard, we move on to something else. What could be simpler than that?”

The default “no” is valuable because it limits what you get into. This removes what Marc Andreessen said is a the biggest cost – opportunity.

If you can say “no” until only the best options come, you’ll do well.

2/ Optionality. “Because we were sort of pioneers of this space we happen to be known for it, but of course it’s just a portion of our portfolio. If for some reason we thought that micro-VC and seed stage investing was not going to offer a risk-return profile for our funds we just wouldn’t do it anymore.”

What freedom, “we just wouldn’t do it anymore.”

Having the options to choose what you do is powerful. Seth Klarman points out that even in a small domain like real estate investments, having optionality to pursue REITs, homes, buildings, and so on is valuable. “The more flexibility you have,” Klarman explained, “the better your ability to maneuver in complicated, volatile, and fairly competitive markets.”

In other areas more optionality means time to make a decision. During the Apollo 13 disaster, flight commander Gene Kranz focused on keeping his options open. “Generating options was our business, and options remained as long as there was power, water, oxygen, and propellant.” Some engineers wanted a faster return time. Others wanted more power to keep the astronauts warm. Whatever didn’t fit the maximize power, water, oxygen and propellant mandate was denied. Those astronauts froze their way back to earth, but made it back because Kranz kept his options open.

A big benefit of keeping a low overhead is that it provides you with more options. Jay Leno, Sophia Amoruso and William Tecumseh Sherman all kept their options open.

Not having optionality forces you, in Bill Gurley‘s words, “to play the game on the field.” When Kara Swisher asked Gurley about the inflated values for venture capital investments it sounded like he didn’t like them, but he had investments to take care of. He was limited in the options for each dollar.

“The managers back then enjoyed a number of tailwinds. One was less competition for deals. The valuations were super low. The acquihire machine didn’t start with the dial set at 11 (it got to 11 a few years later). A lot of investments that may or may not have grown up to anything were taken out at pretty good multiples or at least break even. They did put down a lot of bets and some of those bets paid off in a huge way.”

We call this the ducks on a rising tide effect based on the writings of early Warren Buffett who warned his investors that they should expect more from him than the rising tide that lifts all boats.

In the podcast episode, Yahoo!? we guessed that part of the reason Marissa Mayer looked so good to Yahoo was because she was on the rising tide known as Google.

“I had seen a different side of her, and all the Google executives. I think they get buoyed by being at Google and everybody gets this sort of extra special polish because they’re at Google. It doesn’t mean that once they remove themselves from that paradise they do well.”

Jack Schwager said “If you’ve done well in a bull market all you can assume is you’ve been long during a bull market.” When asked for his investing advice, Auren Hoffman said he didn’t have any. He was just in the right place at the right time. “I’ve been a very active investor in the last eight years, and if you were a very active investor, in the valley, 100% of them did really well.”

Our list could go on to include, Ron Johnson (Apple to JCP) and Tim Armstrong (Google to AOL). Bill Belichick‘s former assistant coaches haven’t done that well. There’s been books written about this idea too.

As Buffett wrote about the duck, “the rise and fall of the lake is hardly something for him to quack about.” Any kind of evaluation of a person should include an evaluation of the situation.

4/ Strategic inflection points (SIPs). “We made a number of observations that ultimately influenced the shape of our practice. One, we could see that these massively disruptive 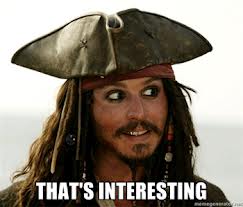 technologies and the promise of big markets were attracting a whole new generation of entrepreneurs that hadn’t been involved in companies before…This new generation of founders were starting companies and getting to product market fit on really trivial amounts of money.”

Andy Grove explained SIPs in Only the Paranoid Survive:

“They are full-scale changes in the way business is conducted, so that simply adopting new technology or fighting the competition as you used to may be insufficient. They build up force so insidiously that you may have a hard time even putting a finger on what has changed, yet you know that something has.”

Grove warned that these strategic inflection points “instead of coming in with a bang, approach on little cat feet.”

Michael Mauboussin encouraged us to look for them. To expect things will change.

“In life consistency is valued as a good thing. If you’re changing your view you’re called a flip flopper. In investing, if you’re doing the right thing, that’s what you need to do.”

Andy Grove also went into how to fight through them.

In the book Grove compares SIPs to the valley of death where you need to pick a heading and then march. “It takes every erg of energy in your organization to do a good job pursuing one strategic aim, especially in the face of aggressive and competent competition.”

It sounds like that’s what Elsea did. The SIP she saw was that things cost a lot less than before and new people were coming to play.

5/ Partners.  “The really mundane things is that when these partnerships don’t work out, it’s usually because something is wrong with the distribution of economics internally. You don’t see it so much in young firms because they have a tendency to come with a notion that they want everything to be equally distributed but you certainly see it in the more established firms.”

In my book 28 Lessons from Startups That Failed there were six major ways startups failed.

This final area of the founding team is what Elsea has seen in her experiences. If you’re starting a company; get the right co-founder, be focused and have clear areas of responsibility, move fast but don’t hurry, and work well together. Do those things, and you’ll avoid one common pitfall.

Addendum. Mayer is easy pickings for the ducks on the pond analogy because she went from one place (Google) to another (Yahoo) and had very different ranges of success. The thing is though, everyone who talks about Mayer says how smart, sharp, and on it she is.  Which brings up this question; have we miscast her?

One tool of thinking is to consider the counterfactuals of a situation. Might it be the case that Yahoo overachieved with Mayer compared to another CEO?

Sport has the idea of VORP (value of replacement player) and we can use that model on Mayer. When she was at Google, she was a player with good stats on a good team. She went to Yahoo and her stats and team were both not as good, but maybe it’s a case where no one could have done anything to save that sinking ship. If we could find a statistically similar replacement CEO would they have done better? Would they have done worse?

Swisher likes to point out that Silicon Valley types can paid a lot and self-congratulate themselves about how smart they are and this is where Mayer gets dragged down. Fortune magazine writes that Mayer is set to make more than $100mm. A sport team manager would look at that figure and recognize they could almost that same production for a lot less.

I’ll probably still use Mayer as the example for this idea, but I could be wrong about it. She might have overachieved based on the conditions and was worth every dollar.

[…] Judith Elsea said that in 2006/2007 venture capital was a different game because, “there was less competition for these deals. The valuations were super low. The aqui-hire machine didn’t start with the dial set at 11.” Auren Hoffman refused to give investment advice because everyone investing at the same time he did, did well. Warren Buffett compares it to a rising tide that lifts all boats (and ducks). Coca-Cola could only have been started in Atlanta.  The ‘Black Soxs’ players did throw the World Series only because they were corrupt, but also because they were poorly paid. […]

[…] more. That’s what Benjamin Graham did when he found information on Northern Pipeline company. Judith Elsea does the same thing, only with an algorithm. Richard Thaler did it with a list of things stupid […]

[…] pattern recognition takes time. Judith Elsea said, “How do you evaluate founding teams? You do that by a process of triangulation, some […]