“Something was bothering me about the Tampa Bay Rays, the winners of the division in 2010,” wrote Joe Peta, and his journey from Wall Street to the warning track began with a That’s Interesting moment.

Peta, a former sell side market maker at Lehman walked off the curb and got hit by a bus, literally. Temporarily disabled, fired, and stranded away from his family, Peta found himself drawn back into baseball. His book Trading Bases tells the story.

Peta had always been a baseball fan, but in 2010 thanks to advances in statistics and (unwelcome) time on his hands, he slid back in. Looking around, seeing the results for the Rays, he realized that there were secrets here. 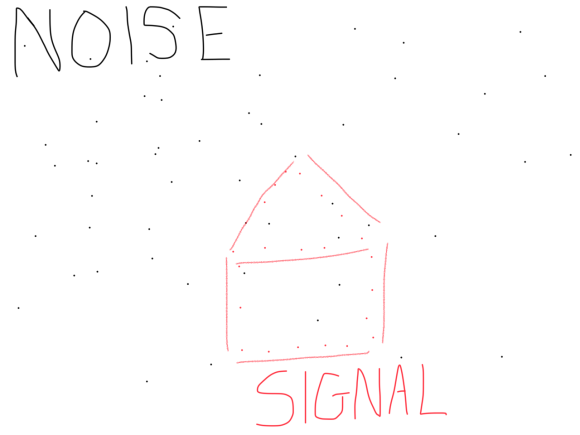 Finding the signal in the noise is like finding secrets. Successes come from finding truer things.

Whatever metaphor, the outcome is the same. If you can see the red house, you’ve got an edge.

Peta got his edge by building models. These were thanks to ‘standing on the shoulders of giants’, and Peta thanks them in the book. Constructing a model is like building a snowman. Gather as much raw material as you can and start to put it together based on what you know. “Resources plus skill,” wrote Peta, give you an advantage.

But a pile of snow isn’t a snowman and data isn’t a model. Peta tinkered. One recurring mistake was small sample sizes. “In general, anomalies are more likely to show up in small samples,” wrote David Levitin.

Peta found “cluster luck.” If a team had especially good results with runners on base, they had cluster luck. He knew it was luck because the results didn’t repeat. He created his own two-jar model.

It turns out that some things in baseball are skill based and some rely more on luck. Hitting home runs is more skill. Hitting doubles is more luck. Starting pitching is more skill. Relief pitching more luck and is so variable that the most accurate predictor is to assume the league mean for every team.

Starting with the base rate of the previous season’s results and making adjustments because of luck (clustering, relief pitching), Peta had a model. Now it was time to head to Las Vegas.

Once Peta started, there were five things he kept in mind. Summed up in one quote it was this:

“It’s very difficult for most people, even many professional traders, to invest in an outcome they don’t think is going to happen. It’s impossible to be an options trader with this mindset.”

Rather than my review, here’s the blurb from Tyler Cowen on the back of the book:

“Joe Peta has a wonderful story to tell and precious insights into the evaluation of talent, investments, and risk. This is a great book for anyone with capital to allocate. But if you love baseball half as much as Peta does, you will find Trading Bases absolutely irresistible.”

*Actually he got hit by an ambulance.

[…] found an edge in blackjack. Morey had an edge in scouting players for favorable (rookie contracts). Joe Peta had an edge betting on baseball. Sam Hinkie combined basketball and […]

[…] from someone building rocket ships and cars. Calacanis echoes what people like Joe Peta have said know the […]

[…] data increases the relative weight of the skill jar scores. These data repeat. Joe Peta found that strikeouts, base on balls, and home run rates were skill jar scores for major league […]

[…] Moneyball was all about finding mispricings because of incorrect labeling. It’s something Joe Peta found too when he bet on baseball. Crypto, for example, is a different […]

[…] Joe Peta hurt his back and looked at baseball statistics to have his lightbulb moment. Thomas Russo advised to “listen for things that surprise you.” Patrick Collison had his moment when he wondered why it was so easy to sell things on App stores but not the internet. […]

[…] say curiosity is fun. It’s like hunting for Easter eggs said Wesley Gray. Curiosity was what Joe Peta did as part of his rehab. Walter Isaacson said a “playful curiosity” was what separates […]