Cryptocurrency is a wicked puzzle. What does anyone understand this?

TIL about Spawn camping attacks on PoW algorithms – if you have the most hashing power, you can disconnect them from the internet then you mine empty blocks for two hours and connect and do that over and over so chain is always full of empty blocks.

Well before today’s garden of information bloomed colleges circa 2002 kept their information in the library. Sure, we had the state-of-the-art T1 modems but nothing to share. It was an information interstate but no Disney World, Michigan Avenue, or Badlands to visit.

Besides syllabi, there was something we transported, music. This was perfect for college. It was freedom to signal – Hanson or Miller – and that’s all we wanted to do. Who let the dogs out? We did.

I’d guess that the non-mp3 traffic was minimal. Some people had Geocities pages, but businesses didn’t post hours, blogs didn’t post updates, and there weren’t that many viral videos to share.

The college campus was built around the library and so was the model. You learn the 101 stuff and then, after a break, learn the 201 stuff. Information was static. Learning was linear.

Recently I emailed a friend; did you see this YouTube channel called Crash Course? He’s younger than me, so, of course, he had. I was there for 1984 because I’d listened to that audiobook along with Churchill and Orwell. In less than a week, I’d read two books and watched a handful of videos. I’d time-traveled, first a fake 1984 then to the real 1944.

Education today is like this. Find a trailhead and go. Follow what looks interesting. Head off, backtrack, and create shortcuts. College is for staying on the sidewalk, life isn’t.

Pre-1984 I’d read Breaking Smart and Venkatesh Rao writes about the Luddites *someone who fears technology (or new technology, as they seem pleased with how things currently are).

But, the Luddites didn’t oppose technology. They opposed worse working conditions and worse quality of goods. It would be like if Google created a better programming language which made their search results worse. Oh, and moved their engineers to the broom closest – and never let them shit.

In college this enthusiastic wandering from Orwell to Churchill to Rao and this podcast enlightening me about the Luddites was impossible. Today it is necessary.

Mentally or physically, there needs to be some force behind the facade. Pre-Napster this meant linear hops from 101 to 201 to 301 to degree. Post-Napster this means version 1.0, 1.1, 2.0, and so on ad infinitum. It means self-education is in perpetual beta.

Our networked education decreases fluency dues but makes them more necessary. Can you speak crypto? Can you decipher bullshit? Can you understand statistics? Can you write in hashtags? Can you translate marketing? It’s a harder world to live in but an easier one to learn in.

In a podcast, Tim Ferriss asked Seth Godin about becoming good at something. Godin said this:

“To be good at something you clear the decks so that’s all that’s left is you and the muse, you and the fear, you and the change you want to make in the world.”

Is that why you aren’t on Twitter Ferriss asked? Godin replied:

“Will Twitter make me better at the things I want to be good at? No.”

Twitter, much like that first college internet connection, is developing. Everyone is still figuring out how to use it. Right now we’re mostly sharing Mellon Collie and the Infinite Sadness. But it’s getting better. There are successful ways to use Twitter which are better than my own bipolar reactions.

In college, I was a bundle of nerves, confidence, hope, and worry. Before each semester I would find each building and each room and time how long it took to walk to each. I also learned how to read a syllabus, check out library books, and submit online assignments. I developed fluencies in this new land.

Tyler Cowen has noticed this shift, commenting that “Books are still better. There’s way more knowledge in books than blogs.” However:

“With Google, it’s easier to forget things, as long as you know how to find them. I find, in the case of myself, that’s how I operate. I remember fewer facts, but I’ve really honed my ability to define the right keywords.

“You (to Russ Roberts) and I have this privileged position of spanning two different human cultures–pre-Internet and post-Internet. And that’s actually fantastic, and I think we’ll go down in history for a kind of richness of our vision, because we’ve lived in both worlds. But I think looking forward there will be many fewer people who have it stuck in their minds as the two of us do that Ty Cobb hit 367.”

Roberts asks if his kids will remember less, Cowen thinks yes, but amends, “But they’ll be much better at finding information than either of us.” In another Econtalk episode Cowen said:

“We grew up without having an Internet, so we had to learn how to look for used books, how to track down scholars, how to make personal contacts in a particular way, how to use a library–in the old-fashioned sense: one had to browse the shelves for books.

“The only book you might have in the house might be a great classic, Tocqueville, and you would read it for the 5th or 6th time and study it in depth, because you couldn’t go browse your Twitter feed. Now, that had big advantages and also big disadvantages.”

“You can watch the speakers you love on YouTube and so on…By the way, I think it was Ben Casnocha who first made the point to me, so I would credit Ben–who I believe I do in a footnote. He said, ‘You’re so lucky, Tyler.’ I said, ‘What do you mean?’ And then he explained this to me. And Ben is young–he’s, I think not even 30.”

What makes Cowen special is the combination of tracking things down and staying on top of things. He’s fluent in each era. One is the area of Deep Work, as explained by Cal Newport. Another is the area of Daily Vlogging, epitomized by Casey Neistat.

Brian Koppelman (Billions, Rounders) and Mark Suster (venture capital) both believe in the dots & lines theory of life. When you do something it’s like a dot on a graph. When you do another thing it’s another dot on the graph. Once you have two dots you can make a line. Dots near each other are okay, dots further apart are better. The average annual return for the stock market is a numerical representation of distant dots.

A recent Great Courses course on Sun Tzu’s The Art of War was great, but I noticed that a lot of what Jocko Willink talks about on his podcast is similar to what Sun Tzu thought about. Two distant dots form a line, that’s good intel.

That means Twitter and travel. It means podcasts and Proust. It means streams and Shakespeare. It means figuring out “Spawn camping attacks on PoW algorithms.” It’s a lot of work to not wise or woke but both. 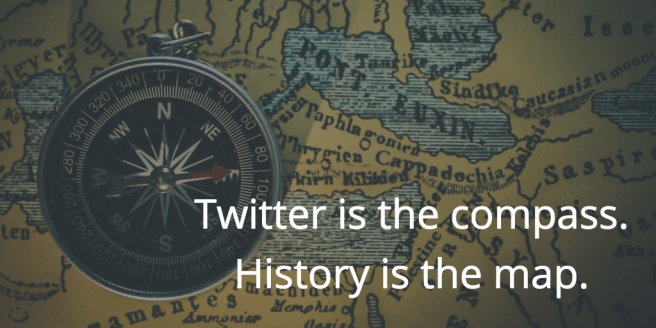