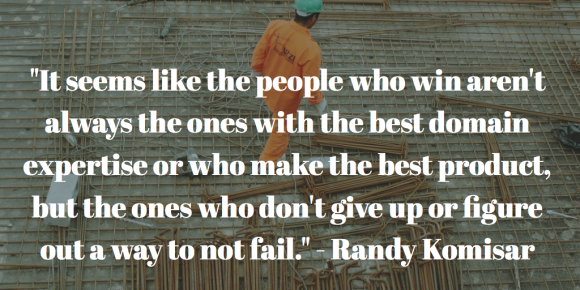 Randy Komisar, entrepreneur & Kleiner Perkins VC, spoke with Jason Calacanis on the TWIST podcast about the “importance of cultivating luck as a skill & accountability over apology, how VC has changed, the future of the market & the enduring wisdom of investing in talent.” We’ll highlight a few parts of the interview. Ready?

Komisar is another advocate for the talent stack and suggests entrepreneurs be able to build, brag, and bounce back. In an August Marginal Revolution post, Why Does Tech have so Many Political Problems, Tyler Cowen wonders if part of Silicon Valley’s problem is, “1. Most tech leaders aren’t especially personable. Instead, they’re quirky introverts. Or worse.”. Komisar said that a key skill is communicating your idea in a compelling way.

This is one of Elon Musk’s skills. “The marketplace was not going to capitalize two (electric car companies) and Elon is a master at conveying optimism and potential to investors. He was able to bridge the gap on the financing side that others couldn’t get to.”

Josh Wolfe said – ideally – “You need a storyteller and you need an operator.” If they aren’t the same person, they need to be two people who think alike.

Sometimes the storyteller is too good. Some people think Musk is selling more sizzle than steak. Jim Chanos says Tesla doesn’t sell cars so much as hopes and dreams and visions.  But maybe that’s what you have to do. Patrick O’Shaughnessy said to Bethany McLean, “This idea of storytelling in business is amazing because of the power that you can create something from nothing with a great story.”

In 2009, Komisar wrote Getting to Plan B, “That book often gets interpreted as, if you don’t believe there’s a correlation (between business plans and business success) why do them?”

This is the wrong conclusion, and misses the point. “I need to see a business plan because I need to see how you think. That’s the linga franca of the business.”

Randy Komisar wants to read your writing to follow your thinking.

David Salem added, “I think that clear writing and clear thinking are synonymous.”

Venture capital has changed. It’s gotten more competitive. “What’s going on (in 2018) from an economic perspectives doesn’t seem rational,” Komisar says. Twenty years ago the base level of a fund could return 1-2X and “have some huge hits on top.” Now, “You’re going to make your money only on your black swans.”

Twenty years ago a venture capitalist “didn’t have to be brilliant to make a lot of money.” You just had to be a little better than average because you had great deal flow.

Now the venture capital advantage – if multiple is your metric –  is size. And bigger ain’t better. “I think what you will see is syndicates of angels and smaller venture capitalists start to produce great multiples with smaller numbers.” Calacanis agrees, “That’s definitely where we live, higher multiples, smaller dollar amounts.”

Warren Buffett does too, noting that his early partnership deals (and returns) were some of the best.

The fail fast maxim is a contextual point often taken out of context. Komisar summarized it well, explaining that entrepreneurs need to, “Quickly discover your business.” Most businesses die from indigestion not from malnourishment. “When you’ve got too much capital you’re insulated from market information.”

The business owner needs to find the business’s customers.

Ron Shaich of Panera did just that. Before selling bread bowls, Shaich sold cookies. “We took the Tollhouse recipe right off the bag and I would stand out front and hand out samples. Then we would adjust the recipe based on what I would learn talking to customers.”

Then the ah-ha moment for Panera came, again, when he talked to his customer. He’d be working the counter and a customer would ask to have their baguette sliced.

“You didn’t have to be a Harvard MBA to say, the real thing here is that the baguette is not the end, it’s the platform to sell sandwiches. My whole view of business is that if you really focus on listening and seeing you’ll learn amazing things.”

A few more quotes from Komisar.

“I look for entrepreneurs who are super-optimistic but not delusional.”  Brian Koppelman said there’s a thin line between art and delusion. How do you tell the difference? Koppelman says if you’re smart, rational, and hardworking – “If you want to be a screenwriter read a thousand screenplays and watch a thousand movies and then you will have a frame of reference for the work if you’re honest enough with yourself.” – you’ll end up on the right side.

Entrepreneurs, like labradors, are over-enthusiastic.  “They know where they have exaggerated their numbers or opportunity. I’m not talking about lying. Lying crosses a different line. But they know where they’ve pushed these things.”

But they need that excitement. Bad businesses, said Bethany McLean, “are always a mixture of self-delusion, rationalization, greed in the service of ego – not money, maybe some finality, maybe some outright corruption, maybe even some idealism.”

When Calacanis asks if Komisar prefers resiliency or domain expertise, he says, “Resiliency hands down…It seems like the people who win aren’t always the ones with the best domain expertise or who make the best product but the ones who don’t give up or figure out a way to not fail.”

That’s a good one to end on. thanks for reading.