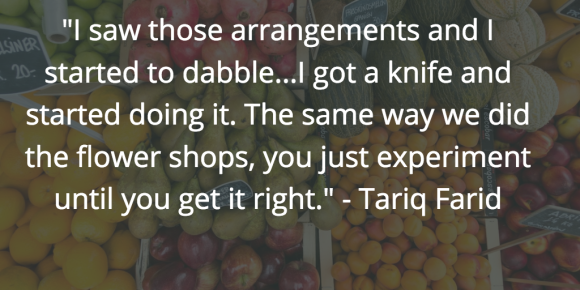 On How I Built This Tariq Farid tells Guy Raz about his careers mowing lawns, cleaning McDonald’s bathrooms, and opening flower shops before starting and growing Edible Arrangments to six-hundred million dollars in revenue.

The tl;dr version is like the Susan Tynan of Framebridge (and fellow HIBT interviewee) post — understand your customer.

Farid’s youth was filled with benevolent adults. His mother and father played large influences but so too did early employers. One man, Charlie, who ran a flower shop said he could “come down a few days a week to keep yourself busy.” Another, a neighbor, paid Farid to shovel snow and mow grass. Sometimes Farid would even show up before it stopped snowing. That neighbor told him, “If you keep working this hard, by the time you’re 35, you’re going to be a millionaire.”

Entrepreneurial children need adults who believe in them. Jim Clark, Yvon Chouinard, and Ken Grossman were all fortunate to have mentors.

For Farid, shadowing Charlie in the flower shop was formative.

“The genius of this man was that he would have you follow him. When he would go and help a customer you would follow and he was just amazing at customer service.”

Farid did all the jobs in the shop, learning by doing. The HIBT interview ends with Charlie, the original mentor talking to Raz.

“I turned to my brother and said ‘How do you like these kids? They picked my brain and opened up a flower shop and now I’m in competition with them! But you know, it’s a beautiful competition. I’m happy with that kind of competition.”

After a six-thousand dollar loan from his father’s boss, Farid had his own flower shop. Even though the shop was small and out of the way it worked because Farid understood what customers needed.

“I looked around and everyone closed at five-o’clock and I stayed open until seven-o’clock and we started to get a lot of customers coming home after work.”

“Live in your customers’ shoes…I like to be a one-man market research department conducting my own surveys. I often engage strangers in conversation at an airport or a hotel to get a feel for others’ opinions. I sometimes become an informal mystery shopper inside my own stores as well as those of the competition to see what works and what needs improvement.”

This is something Indra Nooyi, CEO of PepsiCo does too:

Designers like Steve Vassallo or the IDEO team rely on research. Jan Chipchase conducts his research in pop-up studios. Other times, people Farid or Steve Jobs know (or guess).

Farid’s first locations succeeded, and he opened a second. To make the businesses more efficient, Farid wanted to computerize the shops. It cost twelve-thousand dollars. That was too much to pay so Farid, as he’d done before, figured things out himself.

If wowing customers was the backbone of Farid’s businesses, the can do attitude was the brains. He liked figuring things out. He said in another intervew:

“The world is at the fingertip of anyone who wants to do the research. So if you want to find out how a brand got built, what it took, and what the risks were. People write stories about what they went through…”

Farid’s curiosity led to a fruitful idea. He saw fruit arrangments in stores and on a cruise ship. “I saw that and with that, I started to dabble…I got a knife and started doing it. The same way we did the flower shops, you just experiment until you get it right.”

The Steve Jobs bio is Farid’s favorite book and he explained:

“To this day for inspiration I often refer back to his famous quote that everything around us that we call life was made up by people that were no smarter than any of us and we all have the ability to change things, to influence things and to create things that make the world a better place for us all.”

Gumption pays. Jenn Hyman (another HIBT alum) saw her email list included someone with an @NYT address. She reached out and landed a profile.

Toward the end of 1997, Farid sent a few fruit arrangments to friends. “Some thought it would be great but the majority thought it wouldn’t work. ‘Who’s going to buy fruit on sticks in a basket? Come on.'” Even Guy Raz expressed doubt, “If I was your friend at the time I would have said the same thing. Who is going to buy fruit arranged as flowers? What a weird idea.”

Farid’s father was doubtful too:

“My father was always a person who needed it validated, so what he did was, he asked a “doctor sahib” friend to visit my first shop. His (doctor sahib’s) first question to me was: “Is anyone else doing this?” I excitedly replied, “No, no one else is doing it. I’ll be the first one.” “What makes you think you’ll become successful if no one else is doing it, and it’s such a good idea so all these big companies, the ones with millions of dollars, why aren’t they doing it?” Tariq recalls he was told to calm down, and to concentrate on his flower shop. He was also asked if he had done a focus group, the term he had never heard of. “Yes, yes, I did one. I made one. I put it on the table, and my mother saw it, and she said it would be a complete success.”

Typically, maternal validation is a poor choice. It was one of the themes for start-ups who failed. Instead, be like Scott Norton and his ketchup tasting party. Norton invited friends and neighbors, looking for constructive feedback not adoring praise.

Yet, Farid had something. He had a ‘Zero to One‘ idea. He sold the fruit arrangments alongside his flowers. Then the fruit arrangements passed the flowers. One day a man came in wanting to franchise it. ‘Sure we can do that,’ Farid said, even though he had no idea how. Farid’s career is a bit like the improv bit “Yes and…”.

“Yes, and…” thinking is a rule-of-thumb in improvisational comedy that suggests that a participant should accept what another participant has stated (“yes”) and then expand on that line of thinking.

For Farid, this mindset wasn’t to make laughs, but bring delight.

Time is a zero-sum game and while he built a company Farid did not coach youth soccer. His first marriage ended in divorce and he said that an outsized commitment to a business “is something that you have to be ready for. Our business is unique because when people are taking time off we’re working hard. The holidays are when we’re busy.”

Marcus Lemonis said that part of his advantage is a lack of kids. Morgan Housel commented, “If you want to be an Elon Musk type character you need to work one hundred hour weeks for years, maybe decades, on end. There’s no way around it. There are no part-time founder jobs.” Stephanie Linnartz, Chief Communication Officer at Marriott said, “My family first, my job second and that doesn’t leave a lot of roomful hobbies and book clubs.”

During the long hours and bits of success Farid was humble and always learning:

“I’m very prepared to be wrong. One thing I learned a long time ago was that, when you’re wrong and you admit that you’re wrong, everybody around you will help to dig out of it and help you learn a lesson. But if you have an ego or think you are right people will stomp on you.”

Mistake custody is powerful. Elon Musk does it. Scott Norton built it into his company. David Ogilvy wrote, “Great leaders almost always exude self-confidence. They are never petty. They are never buck-passers.”

“In 1989, I enrolled in college part-time. As I weighed the benefits of the classes against what I was learning and earning with my businesses, I decided to put off college and never finished.”

“Ask questions and listen to the answers. When I started out, I sought the advice of people in similar businesses. Not everyone would take the time to help, but I didn’t give up. Those who did find time for me provided a wealth of useful business information. When I found someone willing to offer advice, I only asked one or two questions and then soaked up all the wisdom they had to offer.”

Thanks for reading, Mike.

[…] Tariq Farid of Edible Arrangments, Elkann had an optimistic curiosity and humility. When he was invited to sit […]

[…] what job your customer is hiring for. IDEO, Tariq Farid, and Susan Tynan have all proved how important this is. Zhong is proving it […]

[…] Tariq Farid of Edible Arrangements put it this way. “Humility is never a sign of weakness. Rather, it is a sign of willingness — to learn, collaborate, benefit from the experience. Arrogance, on the other hand, is often a sign of insecurity and can be an immediate turn-off when dealing with anyone in a business venture.” […]

[…] your ego at the door. Good decision making means always learning.  “Humility,” wrote Tariq Farid, “is never a sign of weakness. Rather, it is a sign of willingness. Unlike seventh-grade […]

[…] is what entrepreneurs do. Jim DeCicco wondered, can coffee be better? Tariq Farid wondered, can I sell fruit arrangements? Katrina Lake wondered, will someone rent the […]

[…] for reading. Our other HIBT posts include Instagram, RXBar, Slack, Panera, Stich Fix, Edible Arrangements, and […]

[…] Tariq Farid has a good story about this. Farid was a high school kid who had to work to help out his family. Thanks to a mentor got the chance to own a flower shop. If he’d asked his customers what they wanted they might say more variety, lower prices, or faster delivery. […]

[…] and talking is thick data and it’s been used by Tariq Farid to create Edible Arrangements, by Carl Turner Jr. to build Dollar General, and by Tricia Wang to […]

[…] customers about what job they’re hiring for’. Large organizations could have spun up Edible Arrangements, Harry’s Razors, Instagram, Rent The Runway and so on but they […]