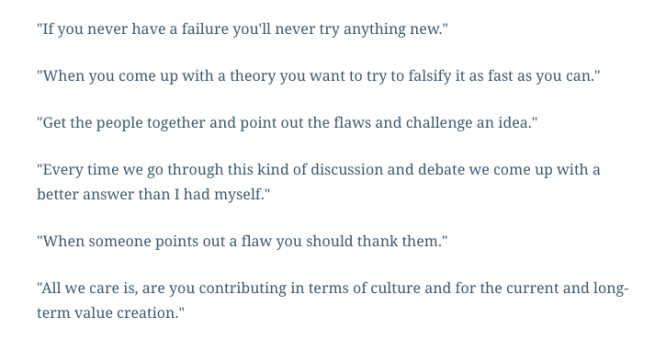 When Charles Koch spoke was on the Freakonomics podcast we took notes. Those are here. To recap.

This time we’ll look at Koch’s November 2017 conversation with Marc Andreessen. The big idea in this podcast episode was experimentation.

Most of the entrepreneurs, investors, and adventurers we profile have experimented. Tariq Farid experimented with knives on fruit. Patrick Collison experimented with different payment sequences. Even David Ogilvy, the advertising icon and generator of brilliant ideas advocated experimentation. “Innovations,” Ogilvy wrote, “provided you test them, can work wonders.”

Let’s see what Koch has to add.

Koch studied engineering at MIT. Why engineering? “I found out at an early age that I was good at one field; math and logic.” Koch experimented to Know Thyself.

After college, he took a job as a consultant, trying different sectors and different roles. “I learned that innovations come from mixing ideas in new ways.” Koch came to believe more and more in “the republic of science” and “an authority of the community.”  New ideas come from challenging old assumptions.

Sure, said Andreessen “Every engineer knows you need to have an open debate.” And, Koch added that it goes beyond just engineering. “What was really fascinating to me was that the principles of social progress were almost identical to the principles of scientific process. That got me really going.”

After his consulting stint, Koch returned to run the family company. The early days were filled with experiments. It was, “a lot of trial and error, mainly errors.” Though these trials and errors Koch decided to focus on two things.

He wanted his company to be counterparty of choice. “We do that by focusing on how we use capabilities to create value for these constituents.” In other words, he wants to deliver value to his stakeholders. Like Scott Norton, Koch is striving for the business version of Charlie Munger’s advice on marriage, “Be worthy of a worthy mate.”

Koch  also wanted his company to be in “continual transformation.” That means, “each one of us has to be lifelong learners, that is, constantly, searching for new and better ways to create value.”

They’ve done this, Koch explained because they hire first for values and then for talent. “These principles are who we are as a company. We hire first on values and then on talent, and by talent, I don’t mean credentials.” What does he mean by talent? Potential. If you hire stupid people, Koch joked, make sure they’re lazy too. That way they won’t do too much damage.

Incentives for these people matter. “We try to do the best job overcoming they agency problem.” Well, said Andreessen, “The Silicon Valley way to defeat the agency problem is stock options.”  You want to get people who think like owners. Charlie Munger values this ownership mindset too, giving this advice:

“A lot of people running the business think like careerists. And believe me, you gotta think like a careerist to a certain extent if you’re in a career. But it also helps to look at the business strategy problems as though you are an owner. And so my advice to you is, you don’t wanna be…never get to be a careerist so much that you don’t see it from the owner’s point of view.”

Koch tries to “Understand what an individual employee has contributed to increasing the long-term value of the company….what did you do to help our culture, what innovations do you bring? It’s a combination of objective measures and subjective measures.”

“You don’t need to be precise but you do need to be directionally correct.” Does that mean an employee can make more than her boss? Yes! “Does it make sense that Lebron James makes more money than his coach?”

But how does a manager marry incentives for results and a culture of experiments?

“If you never have a failure you’ll never try anything new.”

“When you come up with a theory you want to try to falsify it as fast as you can.”

“Get the people together and point out the flaws and challenge an idea.”

“Every time we go through this kind of discussion and debate we come up with a better answer than I had myself.”

“When someone points out a flaw you should thank them.”

“All we care is, are you contributing in terms of culture and for the current and long-term value creation.”

It’s a cultural thing, and you have it or you don’t. Sometimes Koch will give talks and he warns the audience about this kind of management, “It’s not a cookbook. The leadership has to live by the underlying principles.”

The interview ends with some reading suggestions. Before Koch’s suggestions, a few people have told me Sons of Witchita is good. Koch suggested:

Thanks for reading, Mike.