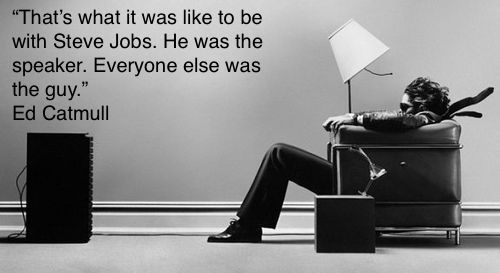  In 2015, Tim Ferriss spoke with Ed Catmull, the computer scientist who leads Pixar and author of Creativity Inc.. In the podcast with Tim Ferriss, Catmull (briefly) lamented the IPO which christened Steve Jobs a billionaire. Catmull said November 1995 was the culmination of twenty years of work and “I felt a sense of loss, a curious sense of loss because I had just achieved this goal.”

Catmull spent the next year reflecting. He wondered why successful companies become unsuccessful ones. “I had a lot of friends that were smart, creative, and hardworking. So whatever it was that was leading them astray was really hard to see.” In looking around, Catmull found a way forward, big goals. Whether it’s Cal Newport’s vital few, Scott Adams’s systems rather than goals, or Tyler Cowen’s production function, everyone has a system for work. Companies too.

How Pixar works, Catmull said, is misunderstood by most people. “Most people think of art as learning to draw or some kind of self-expression. But what artists do is learn to see and the actual training is one of observation.” Pixar’s work works because they tell true tales. It’s not the characters that are real, but the stories.

Our problem is misdefining creativity. Tom Kelley, the founder of IDEO, wrote  “When you hear the word ‘creativity,’ what do you think of next? If you are like many people, your mind immediately leaps to artistic endeavors like sculpture, drawing, music, or dance.” Don’t do this. Artistry is not creativity, but artistry and creativity are both things you can learn.

How? However, you want.

Different forms have different norms where new understandings are born. Catmull never read poetry but loved to listen to Hagel’s Odyssey, which was “enthralling.” Ditto for The Great Courses and their “marvelous lectures.” It’s in history that Catmull tries to find the human experience that he uses for Pixar’s ‘Brain Trust’.

Sometimes, Catmull wrote, Jobs would float out ideas just to see what people would say. Dwight Eisenhower, we saw, did this too.

  Whether with Pixar CFO Lawrence Levy, or Catmull, Jobs would argue well. “Steve was incredibly intelligent,” said Catmull. The people who worked best with Jobs were the ones that focused on the issue, not the issuer. It was as John McCain reflected to David Axelrod:

Catmull ended his book with an afterword titled, “The Steve We Knew.” He wrote, “The outside world sees the mythology of old Steve and the success of new Steve (Apple iPhone) and doesn’t understand the arc that Steve went through.”

We get mercurial Jobs – and it’s always ‘mercurial’ – because that’s easy. It’s easy to understand, remember and caricature. But life changes and our stories should too. We have to avoid what Tyler Cowen called, “the philosophy of once-and-for-all-ism.”

Every story is an abstraction from reality. Sometimes it’s a large one, sometimes not.  Annie Leibovitz recalled being in Israel, on the front lines of a war, in 1982 and seeing photographers rearrange scenes. Ben Falk saw a version of this, with the media and Sam Hinkie. Every ‘Moneyball’ baseball book has a story of the media degrading a team because they were (at least) one step away.

This tendency isn’t malicious, it’s instinctive. We crave stories. When Brad Bird promoted Incredibles Two, interviewers would ask about the comic influences to the movie. Err, there really aren’t any Bird replied.

We want stories that go down easily. But…

After a few hours of listening to podcasts on the porch, in the car, and on a run I’ve been reminded of a very helpful answer: “it depends, life is messy.”

How do we see what life is like? We feel the winds of the real world. That, Catmull wrote, helps Pixar. For Finding Nemo, people got scuba certified. For Ratatouille, they visited Thomas Keller. For The Princess and The Frog, they went to Mardi Gras. For Up, an ostrich visited campus. For Monsters University, they visited campuses.

Thanks for reading. More Pixar here.