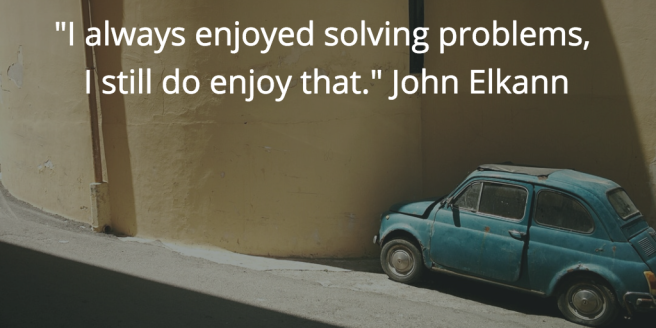 On Masters of Scale Reid Hoffman spoke with John Elkann of Fiat. It wasn’t until finishing this post that I realized the similarities between Elkann at Fiat and Andy Grove at Intel.

“I always enjoyed solving problems, I still do enjoy that.”

Like Tariq Farid of Edible Arrangments, Elkann had an optimistic curiosity and humility. When he was invited to sit on the Fiat board of directors as a twenty-one-year-old “that came with a shock.” But he had good advice from his grandfather:

“The advice from my grandfather was very clear, ‘no one is expecting you to know or understand or contribute. The most important thing is for you to listen, but really to ask questions. If you don’t understand that is absolutely normal.'”

Hoffman added, “John was welcomed onto the board on one condition, he couldn’t conceal his ignorance. His grandfather was insistent that it all hang out.”

David Ogilvy advised young people to learn before they earn. That requires curiosity and humility. Charlie Munger saw this in his grandfather too:  “he had an attitude that was pretty damned extreme. And I would say his attitude was, you had a moral duty to make yourself as un-ignorant and as un-stupid as you possibly can.”

Be there for a deep understanding.

Beyond being on the board, Elkann had direct experiences.

“In parallel to that, he organized for me to start working, spending time in the accounting department, in the finance department, in the legal department just to learn the basic duties of the director and I got incredible teachers and was very fortunate to go through that apprenticeship.”

“I’ve always enjoyed being able to be close to where things happen. The experience I had as an intern in a headlamp factory in the suburbs of Birmingham was really about understanding how a manufacturing process worked.”

Why was it so important for the grandson of the CEO to work the factory lines?

“You are quite far away in a board setting from where the actual life of the business is happening and how that information gets distilled and filtered through the organization.”

“Our IT manager said, ‘Well, that guy is always the last to know.’ He, like most CEOs, is in the center of a fortified palace, and news from the outside has to percolate through layers of people from the periphery where the action is.”

Grove also described what kind of deep understanding you’re looking to congeal from these experiences:

“You have to understand what it is that you are better at than anybody else and mercilessly focus your efforts on it.”

Resilience. The theme of the episode is being like a phoenix and rising from the ashes.

“I often compare starting a company to jumping off a cliff and assembling a plane on the way down.” Reid Hoffman

“It’s as if we jumped out that window with the parts we need to sew a parachute.” Jerry Kaplan, The Startup

Barbara Corcoran wants to see jack-in-the-box founders on Shark Tank. “They keep popping up. It doesn’t mean they don’t take the injury, but it’s a quicker turn around time.”

Truths; uncomfortable, inconvenient, or otherwise. Elkann was fortunate to have Sergio Marchionne running one of the businesses and join as the CEO. There were two reasons he was an excellent choice. First, Sergio had direct experience, “Sergio had run and turned around SGS.”

“People who have no emotional stake in a decision can see what needs to be done sooner.”

Hoffman added, “any key executive must be by nature a truth teller.” We’ll add, you can get to the truth by arguing well.

Good arguments are competitive disagreements. Grove wrote, “we developed a style of ferociously arguing with one another while remaining friends (we call this ‘constructive confrontation’).”

Businesses need to answer; What job is the customer hiring me for? That’s a question truth-tellers can answer.

Career capital. Though not a startup, Hoffman connected with Fiat because of the founder-like connection. He explained:

“The real benefit of having the founder stick around is their ability to take a big risk, to say, ‘We must take this risk. We must take this stab at the future. We can’t just preserve what we built. And not just say it but have the whole company believe in it.”

“The willingness to take that risk and the moral authority to drive it is actually quite hard to replace once the founder steps down.”

For Grove, “It required swallowing my pride.” Why? Grove explained: “Businesspeople have emotions, and a lot of their emotions are tied up in the identity and well-being of their business…In many instances, your personal identity is inseparable from your lifework.”

To make a change like Elkann and Grove pulled off requires no ego, which is hard as sometimes it’s literally the name on the building.